During a video interview with 99 Scenes in July 2013, British singer-songwriter Ellie Goulding was asked about her collection of tattoos, and without actually showing any of them, she revealed that she has a tattoo of the letter “J” inked on her side. Now, few people have seen the tiny white “J” tattoo Ellie has inked on her side, but if you take a close look at this photo we have here, you’ll see the ink located just below her bra line on her left ribcage. Because it’s done in white ink, which is becoming more and more popular these days (think Rihanna’s white “Thug Life” knuckle tattoos), it’s nearly impossible to see, but we promise you, it’s definitely there! Now for the tattoo meaning…

Although she hasn’t talked about the tat in public, we have a feeling Ellie Goulding’s tattoo of the letter “J” was probably inked as a tribute to former boyfriend and Radio 1 DJ Greg James. Ellie and Greg dated for 18 months before calling it quits in January 2012, which the 27-year-old says really “threw her off,” and even though the breakup was amicable, Ellie says she suffered through a serious bout of depression in the aftermath. “You might be with someone you think you know everything about,” Ellie said after their breakup, “then it takes just one thing to throw it all into the wind.” During an interview with GQ in October 2012, Ellie admits that her second album Halcyon is a bit darker than her first, and was partly shaped by her breakup with Greg James.

“I didn’t expect another relationship for a long time after that,” Ellie told Cosmopolitan in December 2013, referring to the heartbreaking split with Greg. “Then all of a sudden I met this other person [singer-songwriter Skrillex], and it was crazy – it came from nowhere.” 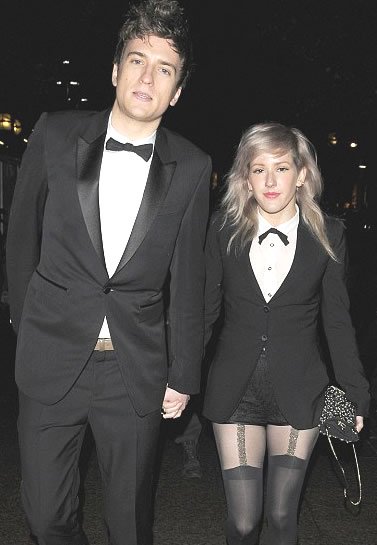 Unfortunately, Ellie and Skrillex, who is best known for his hit song “Bangarang,” only dated for seven months before breaking it off due to their busy schedules, and Ellie never went under the needle as a tribute to that quickie relationship.

So, are you wondering if Ellie plans on removing her “J” tattoo now that she and Greg James are definitely over? Probably not. According to Ellie herself, she still “absolutely adores” Greg, and finds him “ridiculously funny.” The two remain friends and even chatted it up on-air ahead of the 2014 BRIT Awards last month. Since it’s barely visible anyway, we don’t blame Ellie for hanging on to her “J” side tattoo, especially considering how painful tattoo removal is!