**Update: Turns out, the matching “bro” tattoo Harry Styles has with Nathan Followill is that mysterious broken heart, best friends necklace-type piece he has on his chest!! So adorable!

Harry Styles apparently has a bit of a bromance brewing with Kings of Leon drummer Nathan Followill, and the two of them reportedly got matching tattoos after forming a “weird, strange relationship,” as Nathan’s younger brother Caleb puts it. Harry Styles has confessed previously that he is a huge fan of Kings of Leon, putting the southern rock group at the top of his list of all-time favorite bands, and that’s a pretty big deal, if you ask us. But matching tattoos? We had no idea the two guys were so close!

Harry Styles first struck up a friendship with Nathan Followill about two years ago, and according to Kings of Leon frontman Caleb Followill, his older brother and the former One Direction singer have really bonded in the time since. In an exclusive interview with The Sun, Caleb said, “Nathan has like a crush on [Harry]. I think Nathan is just his number one groupie.” Nathan was also given a guitar by Harry Styles, which Caleb says was “probably a gift of love.”

A close friendship isn’t all that Harry Styles and Nathan Followill share though. In that same interview with The Sun, Caleb also let it slip that “[Harry and Nathan] have matching tattoos,” although he didn’t go so far as to reveal the design of the “bro” ink. The world will just have to wait until Harry and Nathan decide to go public with their bromance and debut their matching friendship tattoos. Perhaps Harry has chosen Nathan as his new BFF after splitting with One Direction bandmates Liam Payne, Niall Horan and Louis Tomlinson, and inking a solo record deal with Columbia Records. 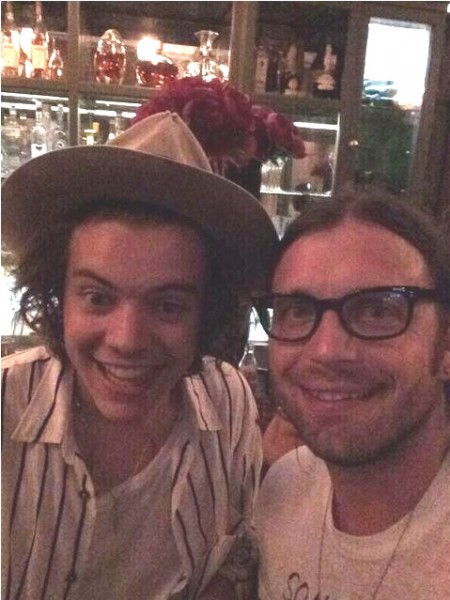 We’re not entirely surprised to hear that Harry went under the needle for a matching tattoo with a male friend of his, being that he once did the exact same thing with Ed Sheeran. Back in August 2012, Harry Styles had UK tattoo artist Kevin Paul give him a tattoo of the word “PINGU” on his arm, a tribute to the British claymation children’s series of the same name. Ed got a similar Pingu-inspired tattoo, but his “bro” tattoo features an image of the actual penguin from the TV series. Harry also has a matching “screw” tattoos with his 1D buddies, and a padlock tattoo on his hand that was inked by Ed Sheeran.