At least twice now, Harry Styles has donned incredibly short shorts that show off his infamous new(ish) thigh tattoo, and yet the pop star still hasn’t revealed the actual design of the mystery ink. This is quite a conundrum if you ask us, because Harry Styles’ tattoos are almost always readily on display, even the racy “Brasil!” tat inked on his upper left thigh, which he happily showed off during a performance in Rio last year. So what’s the deal? Is Harry set on keeping his thigh tattoo a secret, or is he just waiting for the perfect moment to show it off and subsequently send his fans – and the world – into a frenzy?

Harry Styles’ thigh tattoo made its online debut back in April, when Chelsea Handler posted an Instagram photo in which Harry is wearing a pair of short Nike shorts that show off a large tattoo inked on the upper part of his left thigh. Almost immediately afterwards, the photo went viral and the internet was ablaze with speculations about what Harry’s new ink could be – a whale? An owl? A seashell?? Is it next to his “Brasil” tattoo or does it cover it? Exactly how far up does it go…?

The second time Harry showed off his mystery thigh tattoo was just this week, when the singer donned a pair of red cheerleader-looking shorts to play dodgeball with The Late Late Show’s James Corden and his One Direction band mates. Visible just below the hem of his shorts was that pesky thigh tattoo, which Harry seems intent on giving us sneak peeks of, while still keeping a secret. And then we almost almost got a glimpse of Harry Styles’ tattoo during an interview on The Late Late Show with James Corden, but apparently the shaggy-haired pop star wasn’t wearing any underwear, so he couldn’t very well drop trou right on stage, could he? 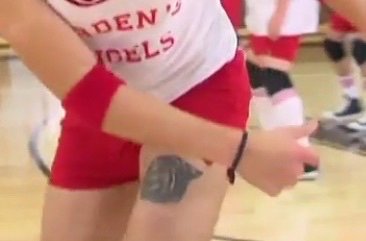 We know you’re dying to find out about Harry Styles’ tattoo on his thigh, and trust us, so are we. So be sure to check back with us, because as soon as we find out what’s been hiding beneath Harry Styles’ shorts, you’ll be the first to know!

One Response to: Okay, Seriously, What the Heck is That New Tattoo on Harry’s Thigh?