In recent interviews with Iggy Azalea, the Australian-born rapper talks a lot about what was on her mind when she left her home and family in Mullumbimby, New South Wales at age 16, and moved to Miami to pursue a career in hip hop, particularly the feeling she had as a kid that if she didn’t get out when she had the chance, she would be stuck there forever. That particular feeling may have been the inspiration behind Iggy Azalea’s tattoo on her foot that reads in a black script font “Colour Me Free,” which also happen to be the title of the fourth studio album by English recording artist Joss Stone.

Iggy Azalea, born Amethyst Amelia Kelly, dropped out of high school in order to move to America, but she says she hated school anyway. According to her, she was miserable, had no friends, and was constantly bullied, mainly on account of her homemade outfits. She wasn’t like kids her own age, and she knew that she didn’t fit in in Australia, where she tried to form a rap group with two other girls at age 14, and decided she was better off solo after discovering that the other girls weren’t taking it seriously. In short, while other kids her age were studying algebra and world history, Iggy was studying the artistic stylings of Missy Elliot and Tupac Shakur.

Iggy Scared of Being “Unhappy and Stuck” 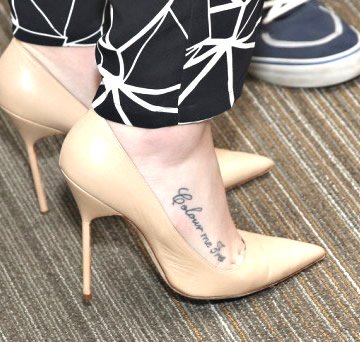 “You’re a kid, so you don’t have any idea how big things are,” Iggy has said about her decision to leave Australia and move to Miami on her own as a teenager. “I was scared, but I was more scared of what would happen if I stayed where I was. It wasn’t just about going somewhere to be a rapper. It was about going somewhere to feel like I could fit in. I was more scared of being unhappy and stuck.” She has also said, “I was drawn to America because I felt like an outsider in my own country. I was in love with hip hop, and America is the birthplace of that, so I figured the closer I was to the music, the happier I’d be. I was right.”

T.I.’s Got Iggy Azalea’s Back

It’s fitting then, that Iggy Azalea’s foot tattoo would be inspired by Joss Stone’s Colour Me Free! album, in which the lead single “Free Me” is about “being free in every sense, especially in music senses,” according to Joss Stone. Being a white girl from Australia who raps with a Southern American accent, Iggy Azalea doesn’t exactly fit the stereotype of the typical hip hop star, but being different suits her just fine. Since breaking onto the music scene a couple of years ago, Iggy has been heavily scrutinized regarding her choice of hip hop over pop music, which is where some people thinks she belongs. According to T.I. though, “I think her influence in music should be attributed to her work ethic, her artistic views […] I think she should be judged based on that rather than her creed, nationality, or what country she’s from.” We’d have to agree!