Sorry Miami Police Department, your photo collection of Justin Bieber’s tattoos is no longer up-to-date, because the singer has just added several new tattoos to his right arm in what is most definitely going to be another full-sleeve. Justin Bieber may be taking an unofficial break from music in the midst of his continuing legal woes, but that hasn’t stopped the Biebs from doing his two favorite things: camping out in the studio recording new tracks and getting fresh ink. Over the past few days, the 20-year-old has quietly posted several photos to Instagram showing numerous new tattoos on his right forearm, including a diamond and a couple of cartoon-inspired pieces surrounding his previous court jester and “Love” tattoos.

Now that Justin Bieber and Selena Gomez are reportedly back together, the Biebs thinks that “Life is Worth Living Again,” according to his romantic new ballad, and that tattoos are worth getting again. Having finished filling up the full-sleeve on his left arm, Justin promptly started working on his right arm back in January with a couple of tiny tats on his inner forearm, before adding a larger Banksy-inspired “Balloon Girl” tat on the outside of his right arm just last week. Now the tattoo-obsessed singer is at it again, this time nearly filling up his right forearm with a variety of individual graffiti-style pieces that appear to share a similar theme inspired by cartoons or video games. 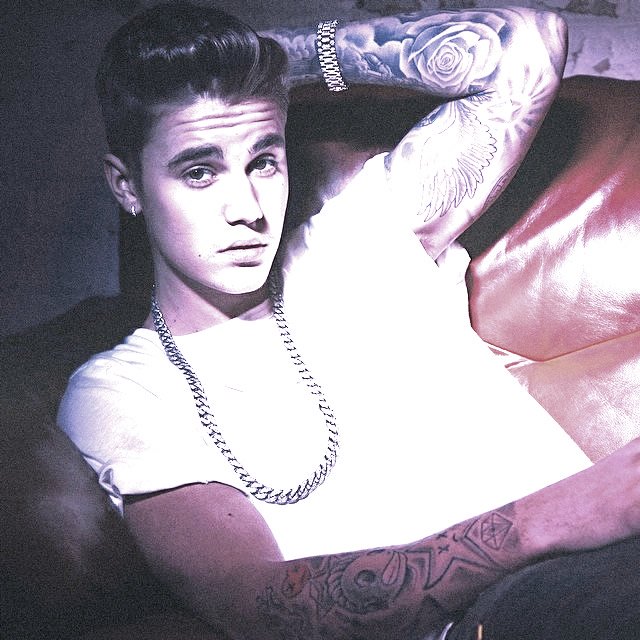 We all know that Justin Bieber is a huge fan of graffiti artwork, and he proved as much when he added his Banksy “Balloon Girl” tattoo to his collection last week. He has even tried his own hand at graffiti in recent years and, although he has received quite a bit of criticism over where he chooses to spray paint, he calls graffiti art his new “hobby.” Fitting then, that many of Justin Bieber’s tattoos in his growing sleeve would be inspired by graffiti-style images, including a large cartoon star with two X’s for eyes (similar to Chris Brown’s star tattoos), a red heart with X’s for eyes, a cartoon hand throwing a peace sign (also with an X included in the design), and some kind of graffiti-style cartoon character’s head – all located on Bieber’s right forearm. Justin’s tattoos were reportedly inked at a Toronto recording studio during a mammoth session that lasted until 5 a.m. on March 15, courtesy of Forever Young Ink. 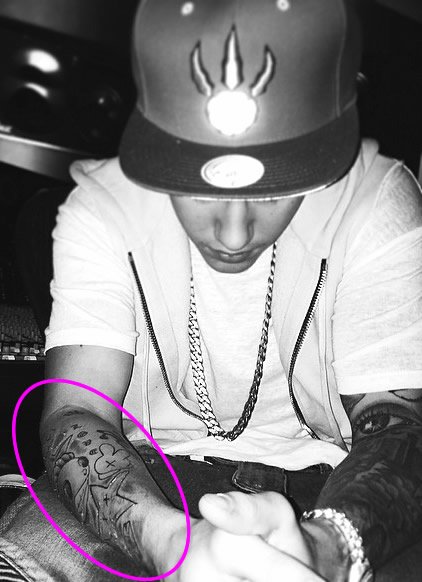 The only new tattoo that doesn’t seem to fit the graffiti cartoon theme is the light outline of a diamond tattoo the singer had inked on the top of his right wrist, just below his hand (which, again, is similar to Chris Brown’s diamond tattoo on his chest). Unless he is suddenly a huge fan of Rihanna, who recently completed her sold-out Diamonds World Tour, we’re thinking that Justin’s diamond tattoo is probably a tribute to the 10th and final song in his Music Mondays series, during which the pop star released a new single every week for 10 weeks between October and December 2013. The final single was Justin’s “Confident” collaboration with Chance The Rapper, and his new wrist tattoo happens to match the diamond image featured in the single’s album artwork. Stay tuned for up-to-date information on Justin Bieber’s new tattoos!