The latest die-hard Justin Bieber fan to get a tattoo tribute to the Canadian pop star is not really a fan at all…Jamie Young, a 23-year-old male bouncer from the UK, made a promise to get an “I Love Justin Bieber” tramp stamp tattoo if Sky Fest II, a Manchester music festival he helped to organize, raised more than $1,500 for charity. Well, Young’s goal was quickly reached, and at the end of the day, the event raised $1,800 for Make Some Noise, a charity that helps children and their families. Not one to go back on his word, Jamie Young became a Belieber that day, allowing tattoo artists Heidi Bye, Sam Janbi, Chloe Harris and Anthony Canning to take turns tattooing the phrase “I Love Justin Bieber” on his lower back.

When asked about his new Justin Bieber tramp stamp tattoo, which is done in black with a little red hat inked above the “J” and “B” letters, Jamie Young said, “I wasn’t bothered about getting it done. I said I would, so I did. I sent the artists the design. The text is the same as the Willy Wonka font. I chose it because it was the funniest looking [font] I could find on my computer.” As for how he feels about his friends and loved ones finding out he got an “I Love Justin Bieber” tattoo, Young said, “My partner Jessica said she isn’t bothered [by the tattoo] either, but she’s used to me getting silly tattoos. I have a Playboy bunny logo, a Hello Kitty, Lego bricks and a Pokémon character on various parts of my body.”

Still though, we wonder if it’s sunk in with the 23-year-old that he’s going to have this Justin Bieber tramp stamp tattoo like, for the rest of his life, even if the pop star’s fame doesn’t last that long. As he said, “I suppose it will be funny trying to explain it to my daughter Amelia when she grows up, especially if Justin Bieber isn’t around then. I suppose it’d be like explaining to me who Showaddywaddy is.” Whether or not he ends up regretting his Justin Bieber tattoo, Jamie Young is already looking forward to raising more money for charity next year, and deciding on another “funny stunt” to pull. “The latest idea is for me to sit in a big bucket of ice for 24 hours,” Young said, “but I might have to check with the doctor beforehand in case I end up in Royal Bolton with hypothermia.” 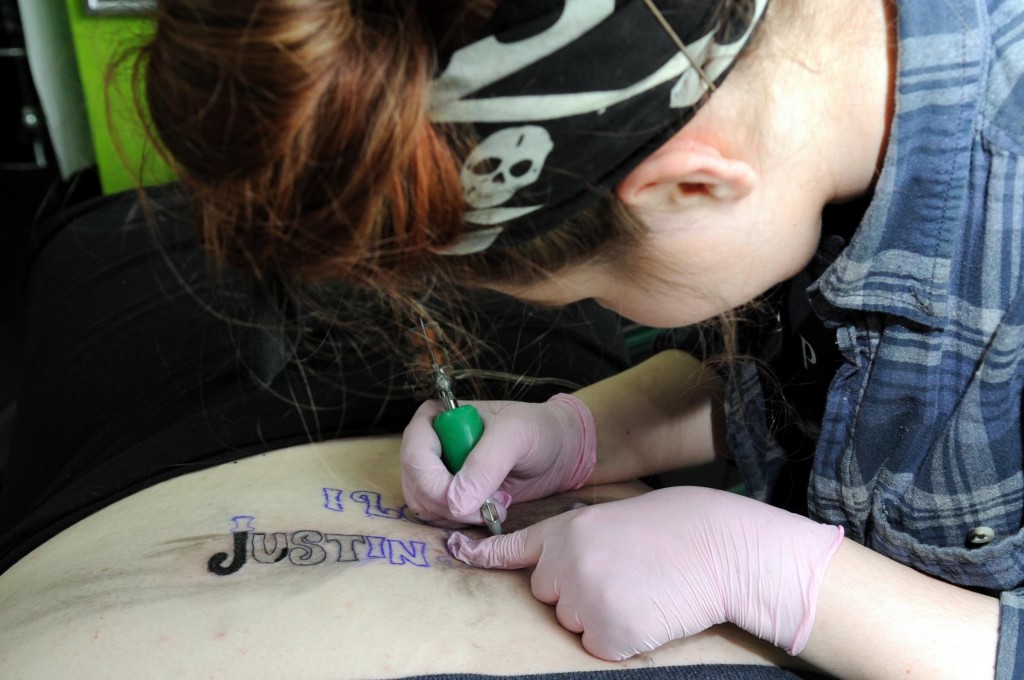 One Response to: Bouncer Gets “I Love Justin Bieber” Tramp Stamp Tattoo After Raising $1,800 for Charity