In an effort to prove she is the biggest Justin Bieber fan out there, 24-year-old Sarah Burgoyne from Bristol, England had her thigh inked with a Justin Bieber tattoo of the lyrics to the teen superstar’s song, “Baby.” The leg tattoo was part of a competition to win tickets to the MTV EMA 2011 awards, where Justin Bieber himself would be performing. Why did she do it? “I was desperate to win,” Burgoyne said. “There aren’t many Justin Bieber fans as dedicated as me and this tattoo goes to prove it.” The Justin Bieber tattoo is inked in neat cursive on Burgoyne’s upper right thigh, and took a total of three hours. We sure hope it was worth it!

This girl’s Justin Bieber tattoo includes the entire first verse of Bieber’s “Baby,” which unfortunately includes such astounding lines as “Oh woooah, oh woooooah, oh wooooah, oh…” and “You know you love me, I know you care.” And to top it all off, MTV arranged for a Justin Bieber look-alike to ink the Canadian pop star’s signature below the verse on her thigh. Maybe it’s just me, but if I went so far as to cover my thigh in a Justin Bieber tat just to win VIP tickets to his show, I would at the very least insist on having the star’s genuine autograph inked on my leg, not some replica signature. 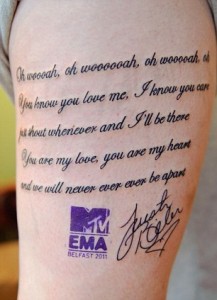 Bieber’s breakthrough hit, “Baby” seems an ironic choice of songs now, considering the paternity suit that has troubled the star recently. The MTV contest, called “What Would You Do For Music,” challenged fans to show their devotion to their favorite music icons. Participants were asked what they would be willing to do to win a trip to Belfast and gain VIP access to the MTV EMA 2011 on November 6, during which Justin Bieber would perform alongside Jessie J, Lady Gaga and the Red Hot Chilli Peppers. Burgoyne, who defines herself as a die-hard Justin Bieber fan, rose to the challenge and secured a place in the finals with her Justin Bieber tattoo. Another girl, 30-year-old Jo Edwards of Clapham, London, demonstrated her love for Lady Gaga by wearing a 4kg dress made of meat like the one worn by her idol to the 2010 MTV VMAs.