Rihanna made headlines for flying celebrity tattoo artist Keith “Bang Bang” McCurdy 1,500 miles to the Dominican Republic to cover up her Maori hand tattoo back in October 2013, but Justin Bieber one-upped the pop star in January 2014 by having that very same tattoo artist actually ink him while flying on a plane. Just five days after his drunk driving arrest in Miami, Justin Bieber commissioned Bang Bang to tattoo him aboard his private plane, and now the two hope to go down in the record books for the highest-altitude tattoo. Justin’s large cross tattoo on his chest and the word “Forgive” on his right hip were both inked aboard the singer’s private plane on a flight from Panama to Canada in January, and according to the über-talented Bang Bang, it was “the most difficult tattoo I’ve ever done for sure.”

Following the in-flight tattoo session, Bang Bang, who has inked some of the most high-profile pop stars from Rihanna to Chris Brown to Katy Perry, admitted that tattooing Justin Bieber at 40,000 feet was pretty darn challenging. “It was really difficult. The plane was shaking, so it’s like trying to do a tattoo while you’re driving over rocks. And so I have to compensate and be so, so accurate. I’ve gotta admit that my adrenaline was through the roof. I didn’t anticipate it would be so difficult.” Difficult or not, Bang Bang did a pretty amazing job on Justin Bieber’s tattoos, especially the intricate cross tattoo the singer had placed in the center of his chest. Justin’s “Forgive” hip tat was inked during the same flight in January, although everyone seems to think that tattoo was just done this month. 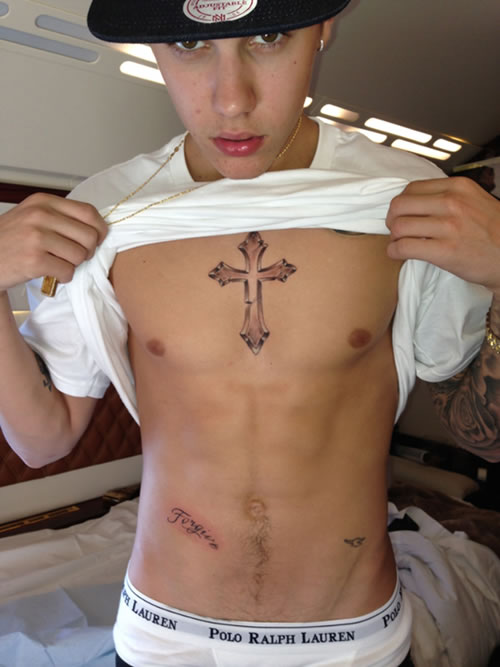 According to Justin, both his cross chest tattoo and “Forgive” hip tat were inspired by his religious beliefs, and the singer reportedly texted Bang Bang after the tattoo session with an explanation of the meaning behind the “Forgive” tat, saying: “Forgiveness is powerful, forgive as Jesus died on the cross to forgive our sins.” Justin Bieber is clearly thrilled about his new ink, but Bang Bang seems to be more excited about the possibility of being featured in the Guinness Book of World Records. “I’m trying to see if we broke a record because we filmed it and documented it; it would be a cool record to have broken, the highest altitude tattoo,” Bang Bang said. “I’ve heard that somebody did a tattoo on an airplane once, but normal airlines fly at 33-35,000 feet and we were at 40,000 feet so I think we might have done the highest altitude tattoo ever. It was fun and we felt like we did something nobody had ever done.” 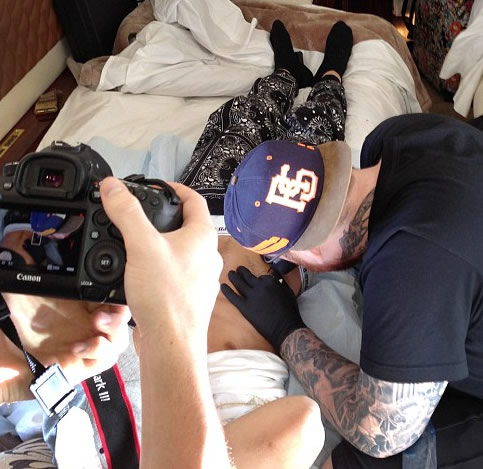 One Response to: Justin Bieber and Bang Bang May Have Broken Record for Highest-Altitude Tattoo