The Biebs took a (short, we hope!) break from working on his almost-sleeve to add some new ink to his back and right shoulder recently, this time opting for some inspirational words from the Bible’s Psalm 119:105, which reads “Your word is a lamp for my feet, a light on my path.” The latest Justin Bieber tattoo is inked directly across from the Indian chief tat he had inked on the back of his left shoulder in January 2013, and we’re guessing the Bible verse was probably done on August 25, 2013, along with the mysterious tat Justin has inked on the inside of his left arm.

The Biebs is proud of his religious beliefs, and this back and shoulder tattoo is the latest proof of that. If we are interpreting Justin Bieber’s tattoo correctly, the Bible verse sounds like it refers to God’s Word lighting the way for his followers and guiding them along the right path to salvation. Passages from the Bible with similar meanings to Justin’s back tattoo include Psalm 1:1, which reads, “Blessed is the one who does not walk in step with the wicked or stand in the way that sinners take or sit in the company of mockers,” and Proverbs 6:23, which reads, “For this command is a lamp, this teaching is a light, and correction and instruction are the way to life.” Obviously, Justin sees the teachings of his Christian religion as a sort of direction, or a means of learning to live his life the way he should. 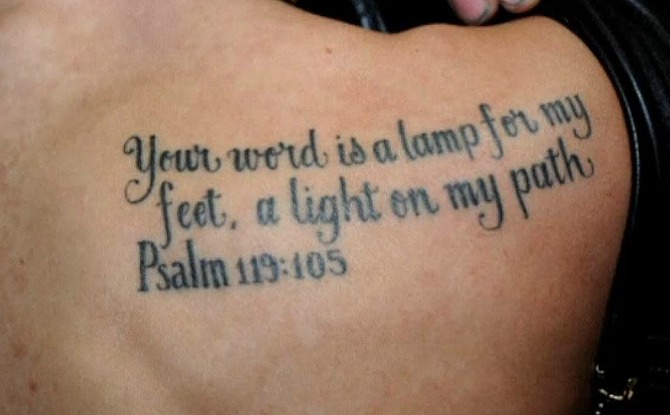 Justin was raised in a religious household in Canada and once said in an interview, “I’m a Christian, I believe in God, I believe that Jesus died on the cross for my sins.” He continued, “I believe that I have a relationship and I’m able to talk to him and really, he’s the reason I’m here, so I definitely have to remember that.” Well, a tattoo is definitely a good way to remember that. This religious-themed tattoo is a fitting addition to Justin’s already extensive collection of tats inspired by his religious beliefs, including the praying hands inked on the back of his leg, “Jesus” inked in Hebrew on his side, the portrait of Jesus he has tattooed on his leg, and the word “Believe” on the inside of his left arm.

4 Responses to: Justin Bieber’s Bible Psalm Tattoo on the Back of His Shoulder