Kelly Osbourne has made it a point to remove some of her more flashy tattoos over the past few months, but this week she decided to go under the needle for a very special shoulder tattoo dedicated to the late Joan Rivers. Kelly’s tattoo is inked on her right shoulder, next to her preexisting butterfly tattoo, and features a cute little bumblebee done in white ink. The E! Fashion Police star took to Instagram to show off the tattoo tribute to Joan, which she had inked by celebrity tattoo artist Mark Mahoney of Shamrock Social Club on October 23. Kelly Osbourne’s tattoo comes just two days after Robin Williams’ daughter, Zelda, visited Shamrock Social Club for a hummingbird tattoo tribute to her late father.

Kelly and the rest of the Osbourne family have known Joan Rivers since Kelly was a little girl, appearing on The Joan Rivers Show in 1991, and like so many other people, the 29-year-old television personality took the September 4th death of her E! Fashion Police costar and longtime friend pretty hard. After Joan passed away during surgery for a routine throat procedure, Kelly posted a picture of the two friends on Facebook, writing, “I’m completely heartbroken by the loss of my beloved Joan. Not only was she my boss, she was and will always be my teacher, therapist, closest friend, inspiration and the grandmother I never knew. She was family and I will never forget her.”

The new bumblebee tattoo on Kelly’s shoulder comes just a few months after the 29-year-old got the word “Stories…” inked on the side of her head, even as Kelly has said publicly that she plans to remove some of the more obnoxious tattoos she has collected over the years. Kelly Osbourne took to Instagram on October 23 and 24 to show off her new bumblebee tattoo, writing: “In honor of you @joanrivers…’If you looked at aerodynamics, at science, the bumble bee should not be able to fly. Physically, it was just not anatomically equipped to soar. Yet it did, defying gravity, defying logic. The bee was a creature that defied and beat the odds, a miracle.’ Thank you for being my Miracle @joanrivers.” 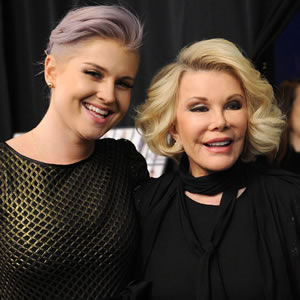 We think it’s sweet that Kelly found such a perfect and permanent way to honor her close friend and co-host, Joan Rivers, and being that the bumblebee tat was done in white ink, it’s something that Kelly alone can look at and remember.