Kristen Stewart has a cool new tattoo on her arm, and while the primary meaning behind the ink has to do with being in show business, the delicate new piece is actually a universal truth that we can all relate to. K-Stew showed off her new tattoo during a recent appearance on The Tonight Show Starring Jimmy Fallon, explaining that the text, “one more time with feeling” is a phrase she believes applies to everything in life. As she told Jimmy Fallon, she got the fresh tat and a new platinum blonde hairdo “Cause I had a little bit of time off, and I was like, ‘I’m gonna scrape my knees and possibly get a bunch more tattoos and, like, shave my head.”

She didn’t actually shave her head (not all the way at least), but she did get a new tattoo, and the fresh piece is inked vertically on the inside of her left forearm in simple black caps. As Kristen says, the “one more time with feeling” tattoo “makes sense because it’s a classic thing directors say to actors.” At the same time though, the saying embodies everything she believes about being a celebrity and about being a normal person going about her everyday life. According to Kirsten, the ink is even more meaningful because “you can always try again with anything you do.”

Kristen Stewart has always been a bit of a bad-ass with a devil-may-care attitude, but it seems like the actress’ taste in tattoos is maturing as she gets older. Compared to her other pieces – a large tattoo she has on her right arm of a black square with an eye and a lightbulb at the center, four lines on the side of her wrist, the number 8 on her palm, and a couple of rudimentary arrows inked on the back of her right arm, this new piece is a professional looking job that obviously holds an important meaning for the actress. 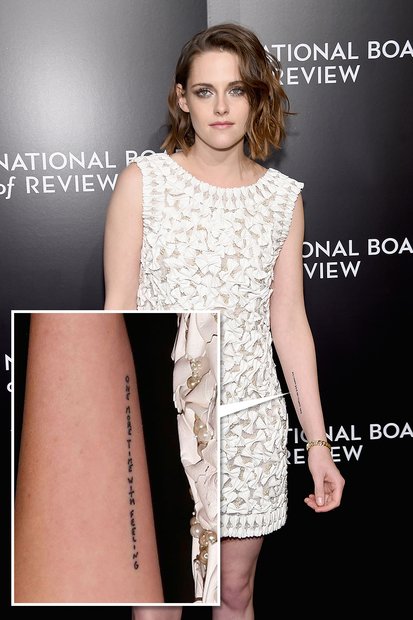 We truly appreciate the sentiment behind Kristen’s new “one more time with feeling” tattoo, especially because it’s something that even those of us who aren’t on the Hollywood circuit can really relate to. No matter how hard or hopeless things may seem, you can always try harder, you can always improve, you can always achieve more. So, what do you all think of K-Stew’s new arm tattoo??