While fans were still recovering from the video of Lady Gaga getting her septum pierced, the inked-up pop star debuted a brand new tattoo – a cute cartoon mouse on the back of her left arm, above her elbow. The quirky Lady Gaga tattoo features a pretty beat-up looking mouse with an “X” over one eye and some other patches on its body that make it look like the poor little guy recently got in a scuffle. The arm tattoo is inked in black and white, and the mouse is also holding a needle, with the string from the needle swirling to form the name “Nat.” Natali is Lady Gaga’s 19-year-old sister, who is making her own name as a fashion designer, and whose nickname when she was growing up was apparently “mouse.”

Lady Gaga, the queen of tattoos and interesting tattoo reveals debuted her new mouse tattoo on August 9, posing for a photo with a guy we are guessing was the tattoo artist responsible for the ink. In the photo, Lady Gaga actually looked kinda like Rihanna, another singer who gets her kicks getting inked. We had a feeling Lady Gaga may have gotten a new tattoo during her trip to the tattoo parlor in late July, when the septum-piercing took place. We’re still not sure if that was the case, but we’re assuming it was! After getting the arm tat, he singer, who is always ready to show off her new ink to fans, took to her website LittleMonsters.com to explain the meaning behind her mouse tattoo:

Got it for Nat, my sister and original hoodrat, her name was always mouse and I am loopy. Needle represents her passion for fashion design. I love her more than anything, she inspires me. Also cuz we watched Cinderella together and the mice sewed in that movie! It has a lot of meanings. 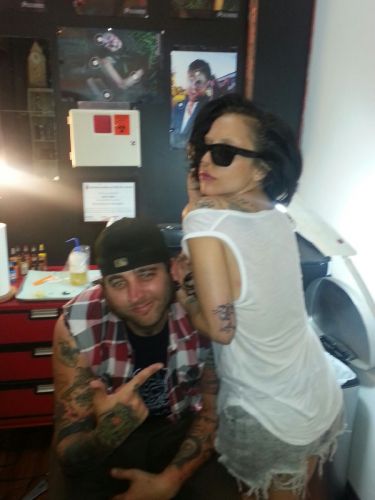 Lady Gaga Keeping it in the Family

It’s been quite a while since we’ve seen a new Lady Gaga tattoo; the singer revealed the cool “R†O” tattoo on the back of her neck in November 2012, and it’s not like the pop star to wait so many months between new tats. It is sweet to see Lady Gaga get another family-inspired tattoo though, especially since we are so used to seeing the queen of pop in outrageous outfits, dancing provocatively onstage. Previously, the singer got a heart tattoo with a “Dad” banner inked on the back of her left shoulder in October 2009, and now she has a tattoo tribute to her little sister Nat as well!