Each and every tattoo that Lady Gaga has inked on her body is one of a kind. Well, they were until now. Probably the most copied of all the singer’s tats is the Little Monsters tattoo she got inked on her left arm in 2010. Since then, men, women, guys and gals all over the world have gotten their own Little Monsters tattoos inked on their arms, Lady Gaga-style. Check out these Lady Gaga-inspired tats on Gaga superfans and let us know what you think!

There’s no doubt that Lady Gaga fans love the Little Monsters tattoo on the singer’s left arm, probably because she got the tat as a tribute to her followers. They love the fan-inspired tat so much, in fact, that plenty of Lady Gaga fans have gone and gotten their very own Little Monsters tattoos inked on their arms – their left arms of course! Lady Gaga calls herself “Mother Monster” and her fans “Little Monsters,” calling them a revolution and saying they are “living proof that you don’t have to conform to anything to change the world.” She has even written a “Manifesto of Little Monsters,” in case you aren’t already convinced that the singer adores her fans. So it’s really no surprise that one of her many tattoos was inked in honor of her loyal followers.

Would You Get a Lady Gaga-Inspired Tat?

Tattoos featuring Lady Gaga’s face, lyrics, song titles and name are becoming more and more popular among fans of the eccentric star. So would you go the extra mile to show your love for Lady Gaga and get one inked on your body? Think about it. The international pop star is best known for her exhibitionist performances, her bizarre hairstyles, her eccentric outfits (lobster shoes, anyone?), and her collection of unique tattoos. So we don’t blame you for having to think twice about getting a tattoo tribute to Lady Gaga. But check it out, these Little Monsters fan tattoos are pretty darn sweet, and we bet you wish you had one! 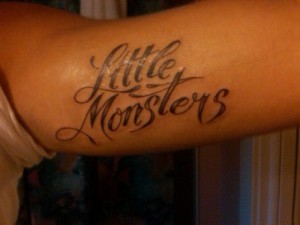 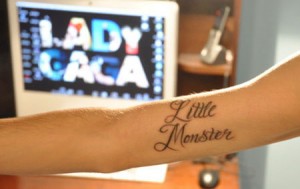