Lady Gaga reportedly spent five hours at the Shamrock Tattoo shop in West Hollywood, which she was spotted leaving with her makeup artist on January 19, 2013, after spending a whopping five hours inside! The pop star has only recently returned to the United States to begin the American leg of her Born This Way Ball tour, and she may have found reason to celebrate with some new ink. Gaga wasn’t making it easy on the paparazzi though; she wore an uncharacteristically low-key outfit with black stockings, a black skirt, a heavy green and black blazer with gold brocade, a hat and sunglasses. If Lady Gaga did get a new tattoo, she seemed intent on covering it up…for now at least. She was, however, kind enough to flash her peace sign tattoo!

The last time Lady Gaga and her makeup artist hit up a tattoo shop, the duo both ended up with a tat celebrating the Rio de Janeiro leg of the singer’s Born This Way Ball tour. With Gaga’s tour finally back in the U.S. and set to take the stage for a performance at President Barrack Obama’s inauguration tonight, we’re left to wonder whether she could have been in the mood to celebrate either one of these important events with some new ink. Truth be told, the pop queen is always in the mood to honor her Little Monsters – as she did with her “Little Monsters” arm tattoo and the “RIO” tat on her neck – so her fans could also have been the inspiration for Lady Gaga’s possible new tattoo. 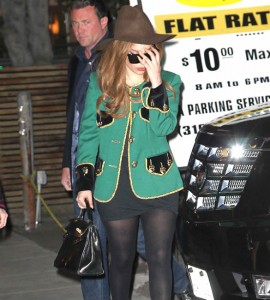 Although Lady Gaga certainly isn’t afraid to get inked on her own, she didn’t visit the Sunset Boulevard tattoo shop by herself. The similarly-dressed woman at Gaga’s side was initially mistaken for the singer’s little sister, Natali, but it was actually Lady Gaga’s makeup artist, Tara Savelo, who accompanied Gaga to the famed Shamrock Tattoo shop. If you remember back to November 2012, it was Savelo who was by Gaga’s side when the singer opted to get the unique “R†O” tat inked on the back of her neck. In fact, Savelo even got her own version of Lady Gaga’s “RIO” neck tattoo while in Brazil, but in a slightly different design. It looks like these tattoo buddies may have struck again (this time on their own turf) so check back soon to find out more about Lady Gaga’s possible new tattoo!