Lady Gaga is still basking in fame from her latest album Born This Way – and raking in profits from the Born This Way Ball tour – but the pop queen is also gearing up to release a new album at the same time, reporting that new songs were “beginning to flourish” during her work with producer Fernando Garibay earlier this year. Although Lady Gaga’s newest album isn’t set to be released until early 2013, the singer has announced that she will reveal the title of the album in September 2012. Taking into consideration Gaga’s last album title reveal, one has to ask: Will it be with a new album-inspired tattoo?

It was just last September that Lady Gaga donned her infamous meat dress and announced the title of her Born This Way album at the MTV Video Music Awards, while accepting her Video of the Year Award for “Bad Romance.” The next day, Lady Gaga sported a new tattoo on her leg: a blue unicorn bearing the message “Born This Way” on its horn. Never one to shy away from flamboyant public displays, Lady Gaga’s chosen method of unveiling the name of her upcoming album is sure to be interesting, to say the least.

According to Lady Gaga, 2012 is all about moving forward and continuing to do what she has already been doing so well. “I just want to keep going,” Lady Gaga said earlier this year. “I’m not as goal-obsessed as I am process-obsessed. I just want to keep writing music. I’m looking forward to putting out another album and going on tour.” When asked about what inspiration she drew from in the development of her upcoming album, the pop star said, “I wake up in the morning with tears in my eyes and I write new songs.” She adds, “I think about the future and the next record and how I can make the stage more beautiful.” 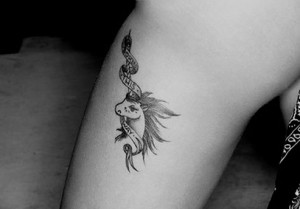 Well, one way for Lady Gaga to make the stage more beautiful would be to add another tattoo to her already impressive collection of ink. The pop queen’s tattoos may only appear on one side of her body, but her eclectic choice of tats gives us all a little glimpse of the many sides of the international pop star. From peace signs to German quotes and a tribute to her loving Dad, Lady Gaga’s tattoos certainly tell an intriguing story about the provocative and wildly popular singer. And a new tattoo inspired by her third studio album would be the most obvious next choice for some new body art. According to the singer herself, she has already played her new album for her record label and is looking forward to its release early next year.

Lady Gaga isn’t the only artist who has gone under the needle to celebrate a new album. Just last month, Canadian pop artist Justin Bieber hit the tattoo parlor and got the word “Believe” inked on his left arm as a tribute to his third studio album of the same name. Although most of Justin Bieber’s tattoos are inspired by his strong religious beliefs, the singer drew on a different influence in his life this time, getting his “Believe” tattoo the day his album was released. Two weeks later, Justin Bieber got another music-inspired tat – a Japanese Kanji symbol on his right arm that means simply “music.”