There’s plenty to look at in the high-fashion trailer for Lady Gaga’s new fragrance “Fame,” but we’re concentrating on the tattoos Gaga chose to flash in the 30-second advertisement. Even though she only gives you a quick glimpse of three tats, the pop queen doesn’t seem to make a single move without having a specific reason, so we’re curious about the connection between her roses, “Born this Way” and Rilke tattoos, and the highly-anticipated “Fame” fragrance. Named after Gaga’s first studio album, the black eau de parfum is meant to be enticing but terrifying, a combination of desire and fear that Gaga seems to have mastered with her music and fashion sense as well.

Lady Gaga has never been afraid to push the envelope, and the exhibitionist singer has definitely lived up to that reputation with her new perfume advertisement. In the teaser trailer for her first-ever fragrance “Fame,” the always-controversial Gaga sports a black latex suit, emerges from a vat of oily black liquid, and poses in the buff while tiny men climb all over an oversized model of her body. The high-fashion shoot was directed by Steven Klein, and calls upon sci-fi, sexual and space-age images to create a general sense of eroticism, as Gaga rises from the black liquid meant to be her “Fame” fragrance. In the scenes where she isn’t covered in black ooze though, you can catch a glimpse of some of Lady Gaga’s tattoos, inked on her arm, thigh and hip.

In a quick scene in which Lady Gaga is straddling a greased-up male model with a concealed face, Gaga’s “Born This Way” and roses tattoos peek through the singer’s barely-there ensemble. Near the middle of the 30-second spot, Gaga slips on a long black latex glove in what appears to be a reversed shot, giving a clear view of the large Rilke tattoo inked on her left bicep. One of Gaga’s largest tattoos to date, the German quote on her arm is taken from “Letters to a Young Poet” by Rainer Maria Rilke, which is apparently the singer’s favorite philosopher. Lady Gaga’s Rilke tattoo relates to the pop star’s new fragrance, as the poet/philosopher’s “Sonnets to Orpheus” deals with “ruhm” or “fame,” which he calls the primary objective of the classical poet. For Gaga’s first studio album, titled “The Fame,” the singer drew from a variety of inspirations to create what she calls “theatrical pop.”

Coming full circle in true Lady Gaga-style, the tatted-up singer recently revealed the title of her upcoming album with a new tattoo: “ARTPOP” inked on the outside of her left forearm. Similar to the tattoo reveal for her “Born This Way” album, Gaga posted a photo of her ARTPOP tat on Twitter earlier this month, along with the caption, “new ink new album.” In a subsequent message, Gaga wrote, “make sure when writing about my new album/project ARTPOP that you CAPITALIZE the title,” and offered a little more clarity with a tweet later on: “Artistic Revolution Through the Potential of Pop #ARTPOP,” giving us another tiny clue about the pop star’s new album. 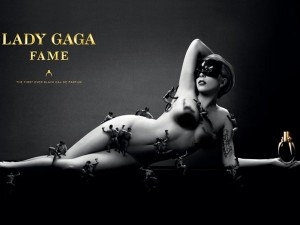 Lady Gaga’s “Fame” perfume is set to hit stores next month, and will come in an egg-shaped bottle, inspired by the egg Gaga was carried in for her 2011 Grammy red carpet entrance. The fragrance will appear black in the bottle but will turn clear when sprayed, hopefully not in the blood and semen scent the pop queen originally had planned for her eau de parfum. “The fragrance is called Fame. It must be black,” Gaga said of her first attempt to conquer the world of celebrity-endorsed perfumes. “It must be enticing. You must want to lick and touch and feel it, but the look of it must terrify you.” If nothing else, Gaga definitely succeeded in getting this general message across in her “Fame” advertisement.