Lady Gaga added to her tattoo collection on November 10, 2012 with some Little Monster-inspired ink that her fans should be super excited about. Despite Gaga’s busy schedule during the Brazilian stop on her Born This Way Ball tour, the queen of pop found a few extra minutes to stop by a tattoo parlor and get a new neck tattoo…and it’s not just any regular ink. Lady Gaga’s tat on her neck features the word “RIO” outlined in black ink, with the “I” designed to look like a cross. Obviously a nod to Rio de Janeiro, where Gaga got the tat and where she performed in an amazing show before a sold-out crowd, Lady Gaga’s “RIO” tattoo on her neck is also a sentimental tribute to the singer’s fans – her adoring Little Monsters.

Lady Gaga posted a pic of her new neck tattoo, which is adjacent to her cherub angel tattoo, on Twitter along with the message: “R†O. Monsters, all over the world you continue to inspire me everyday, you’re like an endless ocean of possibilities.” The pop queen elaborated on the meaning of her neck ink, writing, “the font was derived out of the signatures of three fans, all from different neighborhoods and ages. Represents how music brings us 2gether.” Gaga was obviously moved by the audience at her Rio de Janeiro show, posting the following message on LittleMonsters.com and Twitter the day after the show:

I had the most amazing time last night. 30,000 kids in rio. I swore it would look empty, before we got there, but when we got there it was more of an amphitheater than stadium…30,000 people STANDING in a field. I can only hope those in the back could see. It poured rain, and was so magical. The fans didn’t care about anything but enjoying this moment, and you could tell that many had never been to a concert. It filled me with so much joy I will never forget it, and it reminded me what our connection was built on: love and acceptance. We even played cake at the end just for fun, and I couldn’t believe they were singing along. For little monsters who are looking to connect with hardcore bad kids, rio is the place. Its like little monster mecca. I don’t ever wanna leave. 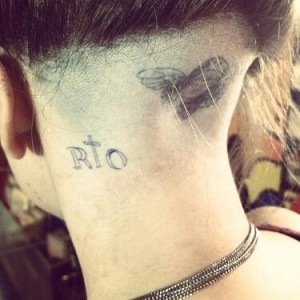 One of the most unique aspects of Gaga’s “RIO” tattoo is that it is stylized with a cross for the “I.” This extra detail is a tribute to the neighborhood of Cidade de Deus, a part of the borough of Jacarepagu, in the Western Zone of the city of Rio de Janeiro, Brazil. Translated to “City of God” in English, Cidade de Deus is also commonly referred to as CDD among its inhabitants. In her tweets following her Rio de Janeiro show and neck tattoo session, Lady Gaga wrote, “Tonight, the love we made set Rio in Flames. I’ll never forget that show Brazil. You ARE the City of God.” Lady Gaga wasn’t the only person from the singer’s crew who was inspired by the Rio de Janerio show and the overall magic of the city though. Gaga’s makeup artist, Tara Savelo, also got a new tattoo, featuring the word “Rio” written in red, orange and yellow script, with a crude Jesus-like figure stretching over top of the letters. Oh, how Lady Gaga’s tats inspire others to get inked!