Geez, Lady Gaga goes about a minute without getting a tattoo and the blogosphere is all in a tizzy, inventing “new” tattoos of hers that have actually been around for ages! Lady Gaga was photographed flaunting her figure in a floral bikini and white pants during her vacation in Mexico on June 6, and some eagle eyes spotted ink on the pop star’s back that looked like it could have been a new tattoo. But, alas, it’s not! Our pop star tattoo experts have examined the photo and determined that the ink is actually just the upper part of Gaga’s prominent roses tattoo, which extends from her lower back all the way onto her left side. What you’re actually seeing in the photo in question is the uppermost vine in Lady Gaga’s back tattoo.

During her foray in Mexico, the always-stylish singer donned a large white sun hat and dark shades, but that didn’t stop all the pop star’s fans from checking out her back for some alleged new ink! Don’t worry people, we too are dying to see what unique tattoo Lady Gaga will come up with next, but this “new” back tattoo isn’t it. Lady Gaga got her roses tattoo back in March 2008, partly to cover up the treble clef tattoo she got as a teenager, and partly because she is super passionate about white roses. The back and side tattoo was inked by the infamous Kat Von D at the High Voltage tattoo parlor in Los Angeles. 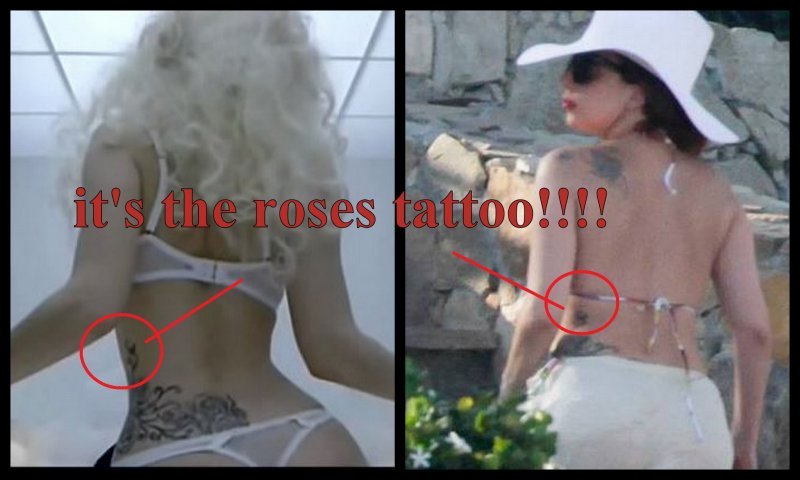 Even though Lady Gaga may not be sporting a new tattoo, we have to admit, the pop star does look pretty fabulous, considering she is recovering from the intense hip surgery she underwent less than four months ago. Although not everyone thinks so, apparently. “My weight/loss/gain since I was a child has tormented me. No amount of help has ever healed my pain about it. But you have,” Gaga wrote on her website, after receiving public criticism about her new curvier figure. “My boyfriend [Taylor Kinney] prefers me curvier. When I eat and am healthy and not so worried about my looks, I’m happy. Happier than I’ve ever been.” Good for you, Gaga!