We had a feeling Lady Gaga would get a new tattoo as a tribute to her upcoming album, but who knew it would be so soon! Gaga recently hinted that she would be announcing the title of her third studio album in September 2012, but it seems the pop star couldn’t wait a minute longer. Lady Gaga got a new tattoo on August 3, 2012, and it seems pretty clear that the ink represents the title of her new album, which will be released in the beginning of 2013. Check it out!

Even though Lady Gaga is still in the midst of performing for her Born This Way Ball tour, there’s no doubt the singer has her sights set on the future. In true Gaga style, she gave fans a sneak peek at what to expect from her highly-anticipated third studio album with a new tattoo that reads “ARTPOP.” Lady Gaga posted a link to the new tattoo on her LittleMonsters social media site, along with a caption that reads “new ink new album.” If you remember how Lady Gaga unveiled the title of her last album – with a “Born This Way” unicorn tat inked on her thigh – this new ink doesn’t come as much of a surprise, does it?

Lady Gaga’s ARTPOP tat is inked in simple black text and is located on the outside of her left forearm. The fact that Lady Gaga chose her left arm for the new tat is significant, since all of her other tattoos are also inked on the left side of her body. Here’s the inside scoop on that little tid-bit: Lady Gaga calls herself a daddy’s girl, and promised her father way back when that she would keep one side of her body “slightly normal” – the right side. It’s clear that Gaga has a close relationship with her family, especially her dad, who had a serious health scare back in 2009. Shortly after he underwent open-heart surgery, Lady Gaga got a heart tattoo inked on her left shoulder with “dad” inked across it. 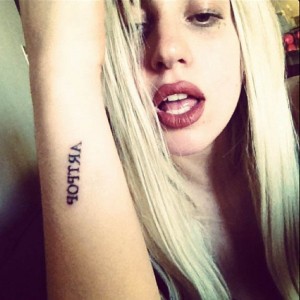 Lady Gaga has big plans for her next album (possibly called ARTPOP?), which is set to be released in early 2013, and said that her main goal is figuring out how she can “make the stage more beautiful.” At a concert in Perth, Australia, Gaga gave fans a little insight into the development of her third album. “Let’s just say I feel, I feel that when I wrote Born This Way, I demonstrated a sense of maturity. And I feel that, on the next album, there’s a lack of maturity, it’s a tremendous lack of maturity or sense of responsibility.” Lady Gaga also performed a new song during the Born This Way Ball tour, called “Princess Die,” which fans are speculating might be included on the new album.

Shortly after uploading the photo of her new tattoo online, Lady Gaga posted another message on her LittleMonsters site that read, “we could/we could/belong together./ARTPOP.” It’s possible that Gaga’s mysterious message could be lyrics to a new song, and the “ARTPOP” written at the bottom seems to solidify the rumor that the pop star actually has released the title of her upcoming album. According to Gaga, new songs for the album were “beginning to flourish” during the time she worked with producer Fernando Garibay in early 2012. And what does Garibay think about Gaga’s much-anticipated album? He says it’s “insane,” and we’re inclined to believe him. Get ready for ARTPOP, people!