In a tribute to three people close to her that she lost to lung-related illnesses, Miley Cyrus got her first tat before she was even legal. With her dad being Billy Ray Cyrus and her inked-up half-brother Trace, are you really surprised Miley Cyrus got a tattoo? We thought not. The “Just Breathe” inked below her left breast clearly means a lot to the singer, although critics of the Disney star have speculated recently about whether or not Miley Cyrus really believes in what her chest tattoo means. Read more to learn why the seemingly innocent Miley garnered such suspicion.

Miley Cyrus’ first tattoo was inked on her ribcage, just below her left breast, when she was only 17! The chest tattoo reads “Just Breathe,” and is a tribute to her friend Vanessa, who died of cystic fibrosis in 2007, and her two grandfathers, both of whom died of lung cancer. As Miley says about the tattoo under her left breast, “It reminds me not to take things for granted. I mean breathing – that was something none of them could do, the most basic thing. And I put it near my heart, because that is where they will always be.” Miley’s “just breathe” tattoo is scrawled in black script below her left breast, and was inked in December 2009 – two years after her friend with cystic fibrosis passed away. Although the legal age for getting a tattoo in Miley’s home state of Tennessee is 18, we’re sure the star had no problem getting parental permission to get the tat underage. And with her just breathe tattoo, Miley Cyrus seems to be well on her way to leaving behind her squeaky-clean (albeit fictional) alter ego, Hannah Montana.

It’s no surprise that Miley Cyrus was photographed with her first tattoo at only 17, since her father, country singer Billy Ray Cyrus, has quite a few tats himself. Miley’s half-brother, Trace, is also virtually covered in tattoos. Pictures of the singer’s just breathe tattoo show Miley flaunting her bod in a hot pink bikini at the Fontainebleau Resort in Miama Beach in December 2009. Miley was relaxing by the pool with friends after having finished her Wonder World tour the night before. Although the initial stories about Miley’s just breathe tattoo indicated that the tat was inked in memory of her friend Vanessa, later reports clarified that Vanessa was in fact a nine-year-old girl that Miley met at a Los Angeles hospital. The girl was struggling with the lung disease cystic fibrosis at the time and Miley claims to have instantly connected with Vanessa, calling her one of her best friends. It sure seems that way, since Miley Cyrus’ body tattoo is a permanent tribute to the girl!

In her book, Miles to Go, Miley Cyrus talks about how Vanessa died while the singer was on tour with the Jonas Brothers, and how the girl’s death affected her. Since both of Miley’s grandfathers passed away after suffering from lung cancer, it’s no surprise that she chose to get “Just Breathe” inked near both her lungs and her heart, in honor of all three loved ones she lost. She even has the phrase “Just Breathe” on the neck of one of her guitars. Unfortunately, recent pictures of Miley smoking a cigarette have raised eyebrows about how genuine the Disney star actually is about the “just breathe” tribute and what it stands for. 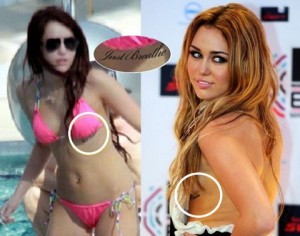 “Just Breathe” is the slogan for the Cystic Fibrosis Foundation, and Disney star Miley Cyrus just couldn’t wait until she turned the legal age of 18 to get the two words inked on her chest. In fact, it was just a few days after turning 17 that pictures of Miley Cyrus’ tattoo cropped up on the internet. Since then, Miley has taken every opportunity to show off the tattoo under her breast, including the first time she showed the tattoo in public in Miami beach, and the time she wore an open-back dress with no bra to the MTV Europe Music Awards in Madrid in November 2010. Posing from the side, every paparazzi in the house had a clear view of Miley’s just breathe tattoo.

Miley Cyrus’ ribcage tattoo is only the first of many, and we are sure there will be more ink in the future for this up-and-coming star. Since she was 17, Miley Cyrus has used body art as a way to express herself and all the things that she believes in, including equality, love, peace, and family. Rest assured, the Disney star doesn’t care what other people have to say about her tattoos, and we are sure that meaning is one of the most important things to Miley when she gets a new tattoo. In fact, Miley once said, “I could never get a meaningless tattoo.” So there you go. Miley Cyrus’ tattoo meanings are important to her, and that’s all that matters.