**Update: On October 14, 2014, Miley Cyrus hit up a tattoo shop in Australia and added some white and light blue color to refresh her black and white all-seeing eye tattoo.

Miley Cyrus got an eye tattoo! No, don’t worry, she hasn’t started inking up her eyelids…yet. Miley Cyrus’ eye tattoo is actually a Middle Eastern-inspired tat inked on the index finger of her right hand, and features a small black outline of an eye with a black pupil in the center. Pictures of Miley’s eye tattoo started cropping up online in March 2012, so read on to find out more about the mysterious ink!

Only a month after getting a “love never dies” tattoo inked on her bicep, Miley Cyrus got yet another tattoo, this time adding to her growing collection of finger tats. Miley’s finger tattoo features a simple black and white eye tat, inked on the second knuckle of her right index finger. The star’s eye tattoo joins several other small tats she has on her right hand, including a heart on her pinky, an equal sign and a cross on her ring finger, “karma” on her index finger, and a peace sign on her middle finger. Pictures of the pop star’s eye ball tattoo hit the web on March 20, 2012, when the singer/actress was leaving a Pilates class in West Hollywood.

Miley Cyrus’ tattoo is believed to be a “nazar” – an eye-shaped amulet used for protection against the evil eye. The word “nazar” is derived from the Arabic word for sight or seeing, and is most popular among Middle Eastern cultures. In Armenia in particular, the nazar is often hung in homes, offices or cars, similar to a dreamcatcher, and is also used as designs in children’s clothing or in jewelry. The eye in Miley’s tattoo is believed to offer protection for possessions and loved ones against the eyes of envy and resentment.

Miley Cyrus Seems to Need a Lot of Protection!

This tattoo representing protection from evil or resentment is awfully similar to some of Miley Cyrus’ other tattoos, including the dreamcatcher tat she has inked on her side. Miley’s rib tattoo features the dreamcatcher she has hanging over her bed, and includes four beaded feathers to represent each of her siblings. Dreamcatchers are a traditional Native American symbol of unity, offering protection from bad dreams for those who are sleeping. According to Miley, her dreamcatcher tat is meant to protect her siblings from harm or evil. Miley Cyrus also has a “love” tattoo inked on the inside of her right ear meant as a protection of sorts from the people who have negative things to say about her. 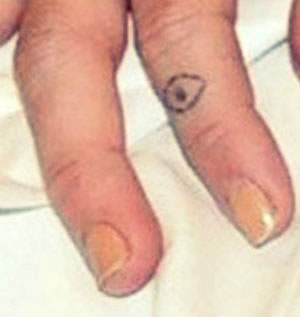 Even though Miley Cyrus is a devout Christian (which is obvious because of her cross tattoo), she seems to have an affinity for symbols representing foreign cultures and religions. In addition to the eye tattoo she recently had inked on her finger, Miley Cyrus also has tattoos representing the Hindu concepts of Om and karma. We’re wondering what Miley’s parents think about this new form of expression, since they are full-fledged Christians themselves. They even had Miley baptized in a Southern Baptist church at the age of 13, as a sort of insurance policy against big-city life before moving to L.A in 2005. According to Miley however, being a Christian doesn’t mean living your life by certain rules. “My faith is very important to me,” she told Parade magazine, “but I don’t necessarily define my faith by going to church every Sunday.” It certainly seems like Miley is branching out lately, with her new tattoos, new image, and new outlook on life!

2 Responses to: Miley Cyrus’ Eye Tattoo on Her Finger