While in Brazil for her Gypsy Heart tour in May of 2011, Miley Cyrus did something she loves to do every now and then. You guessed it! She got a little anchor tattoo inked on her right wrist as a symbol of a “safe port,” designed in the shape of an ship’s anchor. Despite the fact that the aquatic anchor tat raised eyebrows about Miley’s supposed obsession with tattoos, the pop star believes the tat represents hope and keeping your feet on the ground. But Miley Cyrus’ wrist tattoo wasn’t the only new addition that was inspired by her trip to Brazil. Read more to find out!

The seventh of Miley Cyrus’ tattoos is a small anchor inked on the inside of her right wrist. Miley Cyrus’ wrist tattoo was inked by tattoo artist Fabio Satori while she was in Brazil for her Gypsy Heart tour in May 2011. Pictures of the singer’s tattoo session show the 18-year-old superstar at a tattoo parlor in Rio de Janeiro getting inked by Satori, before continuing her tour in Colombia later that week. Talking about Miley’s wrist ink, tattoo artist Satori said, “It was fun, it was a surprise on Sunday.” He continued, “A friend of mine works in the production of Miley and called me saying that the team wanted tattoos. Later, I was told that Miley wanted one as well and because, for her, leaving the hotel is always difficult, we did it at the hotel.”

Satori also said, “Miley told her mother that she wanted something that refers to a safe port, something that reminded her that she always has a safe place to return to. The significance of the design is one of hope and a reminder to always have your feet on the ground.” In other words, the meaning of Miley Cyrus’ tattoo represents a reminder to stay centered and seek a safe haven when things get rough. One of the major reasons for the pop star’s wrist tattoo is likely the fact that Miley’s parents, Billy Ray and Tish, have considered ending their 17-year marriage. Now more than ever, it’s important that Miley still has a safe haven and feels like she can keep her feet on the ground.

The fact that Miley chose the anchor tattoo to ink on her wrist also says a lot about the teen star’s character. Despite the fact that Miley Cyrus reportedly banked $48 million in 2010, the singer revealed that she is actually quite frugal. She said, “I’m very careful about the things I buy, because a year from now, I know I’m gonna look at a thing that I spent 30 grand on and say, ‘What the heck was I thinking? I don’t want a diamond skull.’” Miley Cyrus has also announced that she would like to do more charity work, including serving as a missionary in Indonesia building wells and bringing water to people who need it. “Honestly,” Miley says, “I cannot sleep at night because I get so excited about doing good things for the world, changing the world.” Miley’s wrist tattoo isn’t the only thing that she felt compelled to do while in Brazil. The pop star tweeted after the trip, “Brazil has inspired me to add one more song to my set. I think you guys are gonna be very happy about the new addition.” 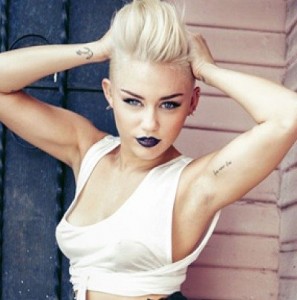 Although Miley has been the subject of criticism recently for her seemingly wild behavior, and despite the fact that the public blames her parents for her so-called tattoo obsession, the teen star is actually quite grounded and close to her parents. In fact, Miley Cyrus’ heart tattoo on her right pinky matches heart tattoos that Billy Ray Cyrus has on his left hand and that Tish Cyrus has on her left pinky. Miley explained in an interview, “You can say what you want about [my parents], but I think the world of my mom and dad. They are the best. I am not afraid to tell them anything.” She continues, “Sometimes they’ll say, ‘Miley, we’re not completely stoked about your decisions,’ but at least they’re not worried at 3 in the morning, wondering where I am.” But, in the midst of Billy Ray and Tish’s possible divorce, Miley probably feels the need for a safe port now more than ever. 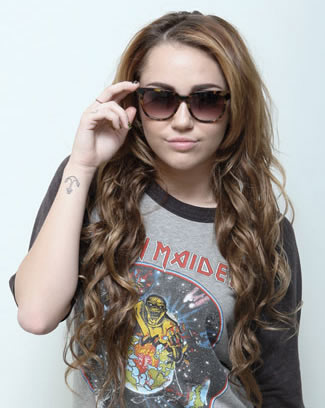 The fact that Miley’s parents allowed her to start inking up her body when she was only 17 is just the beginning of the issues many people have taken with the singer and her new adult behavior. As Miley Cyrus deliberately distances herself from the Disney character, Hannah Montana, that she spent so much time playing in recent years, more and more parents are becoming outraged at the behavior of the person who used to be their teenage daughters’ role model. From pole dancing at the 2009 Teen Choice Awards to starring in a not-so-viewer friendly video in December 2010 in which Miley was caught smoking a bong, to getting ten tattoos before age 20, it seems that Miley Cyrus has done anything but keep her feet on the ground, which is what her anchor tattoo was supposed to mean. However, as Miley said, referring to the bong incident, “What I never wanted was for my fans to ever feel like I betrayed them…to feel like I said I was something then turned around and was something that I’m not.” The pop star continues, “But I’ve never, ever claimed to be perfect.” Well there you have it, her secret’s out!