Stop the presses! Miley Cyrus got yet another tattoo inked on her body, and this one represents a popular Hindu symbol or concept, much like her “karma” finger tattoo. The tat is inked on her wrist and marks the young singer’s tenth tattoo. Miley’s wrist tattoo has brought up some serious questions among her fans: is Miley going to start practicing Hinduism…and is the pop star’s tattoo addiction getting out of hand? Regardless of the criticism Miley’s tattoos have sparked though, we still think her tats are pretty cool. Read more to learn about Miley’s Om tattoo!

In September 2011, Miley Cyrus again expressed her love for tattoos by getting yet another tat, this time inked on her arm. Miley Cyrus’ arm tattoo features the Hindu religious symbol “Om,” and is inked on the inside of her left wrist. The second of the singer’s Hindu-inspired tattoos, the Om tat brought about significant speculation among fans about Miley’s beliefs, since she has always declared herself a devout Christian. Some people have even said that Miley’s tattoos are joining Rihanna’s tattoos and David Beckham’s tattoos in embracing the Hindu religion. However, we doubt that just because Miley Cyrus got a couple of popular Hindu symbols inked on her body, she is going to start preaching the Bhagavad Gita. What do you think about the singer and actress’ Om tattoo? Cool or over-the-top?

It appears as though Miley Cyrus may be expanding her belief system to include a little love for Hinduism. In July 2011, Miley tweeted, “Dear Universe, For my next life can I please come back as some form of marine life? Such a great day. The water makes me feel so free :).” While some people may find it hard to believe that this random tweet means Miley is interested in Hinduism, Miley Cyrus’ wrist tattoo and the “karma” tat she got in July 2011 are certainly permanent indicators that this may be possible. According to Hindu belief, “Om” is a mystical symbol containing the universe, and is used to introduce and conclude religious works.

Miley Cyrus isn’t the only celebrity that has dipped into Hinduism for tattoo ideas. 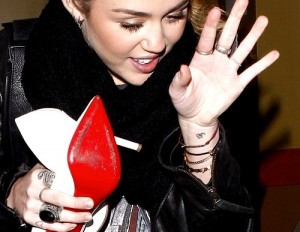 In fact, there seems to be some sort of fascination among celebrities these days when it comes to tattoos depicting Hindu symbols and Sanskrit prayers, and tattoo artists have seen an influx of Hindu-inspired tattoos lately. Mega-stars Rihanna, David Beckham and Jessica Alba all have tattoos that represent Hindu or Sanskrit concepts or symbols, and it seems Miley’s wrist tattoo has even inspired non-celebrities to get Om tattoos, many of whom ask for a replica of Miley Cyrus’ Om tattoo in particular.

Hinduism is the oldest and third-largest religion in the world, and Sanskrit is considered the sacred language of the gods. Although Hindu statesman Rajan Zed has welcomed Miley Cyrus’ interest in “Om” and other Hindu concepts, he has urged the singer to go beyond the religion as simply a fashion statement and inspiration for tattoos,to explore the rich philosophical thought that Hinduism offers.

According to Zed, he or other Hindu scholars would gladly provide Miley with the resources she needs to explore and understand Hinduism. We’re not sure that Miley had all that in mind when she opted for an Om tattoo though. She was probably just looking for a tenth tattoo design and thought the Om tat looked cute and represented something cool and unique. Well, maybe not so unique…but cool.