While other celebrities and pop stars were getting dressed, doing their hair and practicing their acceptance speeches in the hours leading up to the MTV Video Music Awards this year, Nick and Joe Jonas were preparing for the VMA’s in an entirely different way – by getting brand-new tattoos! The Jonas brothers – sans Kevin and Frankie, sadly – revealed their fresh ink on social media on Sunday, August 28, and the tattoos just happen to be adorable matching arrow pieces, which they had done mere hours before the awards show. Talk about brotherly love, right??

Nick and Joe Jonas took to Nick’s Snapchat account to document the tattoo session that resulted in their matching arrow tats, and then posted a photo of the final product, along with the caption “BOOM,” obviously proud of their new bro ink. The brothers’ matching tattoos feature a simple arrow design inked on the backs of their upper arms, with the arrows pointing in opposite directions. This way, when they stand side by side, with Joe on the right and Nick on the left, the arrows are pointing towards one another.

This isn’t the first time Nick and Joe Jonas have gone under the needle for permanent ink. In fact, this isn’t even the first time they’ve gone to get tattoos together! Back in 2012, the brothers hit up a tattoo shop for fresh ink, and while Nick opted for a “Mercy” tattoo on the outside of his right forearm, Joe got a tattoo of an African Adinkra symbol on his arm that means “help me, help you.” Nick also rocks a series of symbols inked on the inner part of his left arm that means “God is greater than the highs and the lows,” and Joe has a unique arm tattoo of an open hand surrounded by a triangle, done by folk tattoo artist Curt Montgomery. 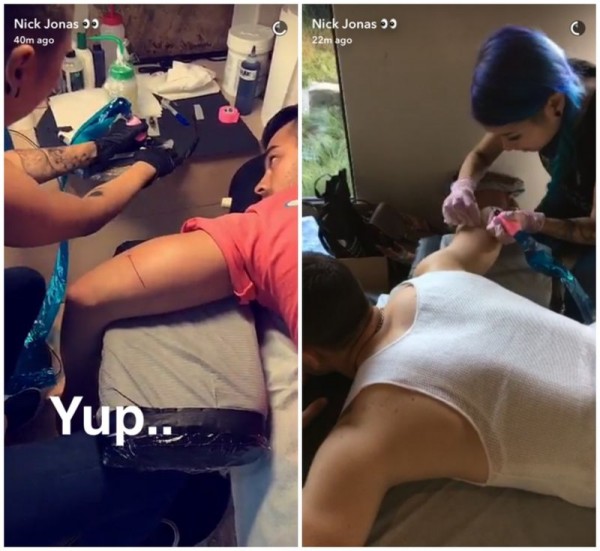 We think it’s adorable that Nick and Joe Jonas prepped for the 2016 VMA Awards by getting new tattoos – and matching, no less! As for why the guys decided to get matching bro tattoos without Kevin and Frankie, Nick was scheduled to perform “Bacon” with Ty Dolla $ign at the VMA’s, and Joe’s band DNCE was nominated for Best New Artist, so the ink definitely seemed like a pre-VMA’s bonding opportunity for the two. What do you all think of the boy’s matching arrows tats??