Pink has been performing in clubs since she was 14 years old, but believe it or not, she has actually been collecting tattoos on her arms and hands since she was even younger. Pink got her first tattoo at the age of 12, and has racked up more than a dozen more tattoos in the meantime, most of which are inked on her arms, wrists and hands. “I think they are incredibly sexy,” Pink once remarked about tattoos. “My husband is covered with them. I don’t regret any of mine because they all represent a chapter in my life and that’s what tattoos are for.” Pink’s body certainly is a canvas representing everything she has done in her life so far, and she has been decorating it diligently for years. From cute and sentimental to silly and downright grim, the following is a complete collection of Pink’s arm tattoos.

Pink’s left arm tattoo was inked as a tribute to a loved deceased dog. “Sir Corky Moore” is inked on the outside of Pink’s left arm in honor of her childhood dog, Corky. This makes sense if you remember that Pink’s real name is Alecia Beth Moore. “He was my childhood dog, West Highland terrier,” Pink says about her beloved Corky. Pink’s arm tattoo also includes the numbers 89-03 below “Sir Corky Moore,” which is the date Pink’s childhood dog passed away in 2003 from old age. In Pink’s music video for her song “Trouble,” there is also a grave with the name “Corky” written on the cross.

Pink’s “What Goes Around Comes Around” Wrist Tat

Pink’s favorite tattoo encircles her right wrist and reads, “What goes around comes around,” in a funky black text. The unique tattoo on Pink’s wrist was inked by an artist friend of the pop star’s in Philadelphia when she was 17, and it also includes dotted arrows throughout the tat to represent “around.” As Pink says, “It’s my only truth that never changes. I believe in karma. I believe that it comes around in both ways. I’ve watched really good people have really hard times and then all of a sudden something beautiful happens.” She continues, “I’ve seen instant karma and I’ve seen karma that I think takes lifetimes, and I’ve felt a lot of it.” Pink’s “What goes around” tattoo may be her favorite, but it’s only one of Pink’s many arm tattoos. 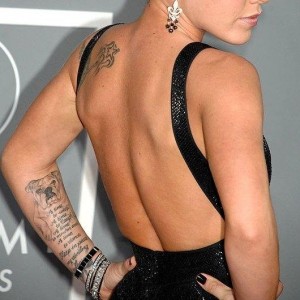 Another arm tattoo close to Pink’s heart is inked on the inside of her left forearm, and features a picture of her late Bulldog, Elvis, along with a Bible verse that reads, “A time to weep, a time to laugh, a time to mourn, a time to dance. Sleep in peace my darling, I release you.” Pink’s arm tattoo is a tribute to a beloved dog of hers that was given to the pop star by Lisa Marie Presley – hence the name Elvis – and who tragically drowned in her swimming pool in 2007. “I wasn’t there,” Pink has said about her dog’s death. “He was being babysat.” The bulldog tattoo on Pink’s arm was inked by Twig from Hart and Huntington Tattoo – a chain of tattoo parlors owned by Pink’s hubby, Carey Hart. Elvis obviously meant a lot to Pink, who is a self-professed animal lover and has another tattoo inspired by a late dog of her’s inked on the same arm. 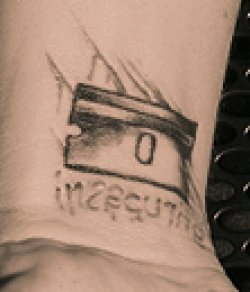 One of the more disturbing of Pink’s tattoos is inked on the inside of her left wrist, and depicts a razorblade with the word “Insecurity” inked in red capital letters. “That means to me that insecurity will kill you,” said Pink, whose parents divorced when she was nine, and whose teenage years consisted mainly of drinking, partying and experimenting with drugs. The razorblade tattoo also includes some red gashes on her wrist that make it look like she tried to slit her wrist with the blade. Pink’s wrist tattoo featuring the razorblade definitely shows off the pop star’s darker side that she cultivated as a teen, and is inked just below her bulldog and Bible verse tat.

Just below her “What goes around comes around” tattoo on her right wrist is a banner tattoo that reads “TRU LUV.” Pink’s wrist tattoo was a spontaneous decision that she and then-boyfriend Carey made one night in Tampa before the couple went bowling, and Carey has a matching tat on his right wrist that says the same thing. 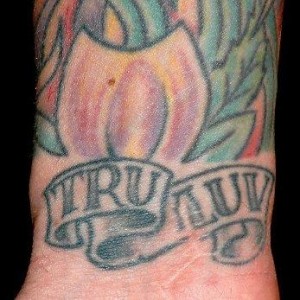 In fact, the night Pink’s wrist tattoo was inked was her’s and Carey’s second date, way back in 2001. “Although the “TRU LUV” tat was inked during a time when the couple was madly in love, neither Pink nor Carey had the tattoo removed when the couple split for a short period of time between 2008 and 2010. When it comes to tattoo removal, Pink says, “We don’t do that. That’s the most disrespectful thing in the entire world. There was a rumor going around that Carey got his tattoos covered and I called him and I was like, ‘What are you doing?!’ He’s like, ‘Baby, I didn’t cover the tattoos. I’m never covering the tattoos. It’s all good. What are you doing today?’”

Another one of Pink’s tattoos is a circular button on her left arm with the word “HELP” written below it. Pink’s “help button” tattoo was inked in 2006, during what she sarcastically calls “a really brilliant moment of clarity” with fellow musician and friend Butch Walker, who has a matching tat in the same design. “…we got it done early in the studio that night,” Pink says of her help button tattoo. “We had been drinking. Obviously.” According to Pink herself, the pop star presses her help button tattoo for comfort when she is facing a problem in her life. “I got a ‘help’ button tattooed on my arm so I can press it when thing aren’t going so well,” Pink says. “It hasn’t worked yet though, I gotta get it activated!” 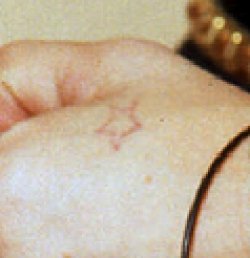 One of Pink’s tiniest tattoos is a small red star outline inked on the outside of her left hand, near her thumb. Although Pink hasn’t spoken much in public about her star hand tattoo, we do know that fellow musician, producer and friend Linda Perry has the exact same tat on her hand. Pink’s hand tattoo is one of the pop star’s smallest tats to date, and is also one of the few tattoos that she has inked in color. The star tattoo is probably inked in honor of Pink and Linda’s friendship, much like Pink’s “best friends” heart tattoo.

Just above her bulldog tat, Pink has another tattoo on her left arm, right near the inside of her elbow, that features one half of a broken heart. Inside the heart on Pink’s arm tattoo is the beginning portion of the words “Best Friends,” and Laura Jeanne Wilson, Pink’s best friend and a member of her management team, has the other half of the broken heart tattooed on her body. Pink’s arm tattoo is super cute and is inspired by the “best friends forever” necklaces that little girls sometimes wear.