Bajan superstar Rihanna and her besty, Melissa Ford, turned heads in Barbados last year when they donned risqué bikini-style costumes and joined in on the Kadooment Day Parade festivities. Some of the highlights of the carnival were captured in pictures of Rihanna drinking, backing it up on local boys (and girls), and performing in her first concert in Barbados since she left the island six years ago. Plus, there are lots of great pictures of all Rihanna’s tattoos, which aren’t even close to being hidden by the pop star’s skimpy getup. But hey, who’s complaining?

You think you’ve seen Rihanna in her skimpiest outfit? Think again. A wild and party-ready Rihanna hit the streets in Barbados in a barely-there bikini and headdress in late 2011 to celebrate her island’s annual Kadooment Day Parade, and the pictures have sparked a web frenzy (for obvious reasons). Dressed from head to toe in red and gold, Rihanna looked like a sort of racy Bajan princess, complete with fishnet stockings, a feathered head piece and gems adorning her face. And since her bikini-style costume left little to the imagination, nearly every single one of Rihanna’s tattoos were visible to those around her…and to everyone on the internet as well. 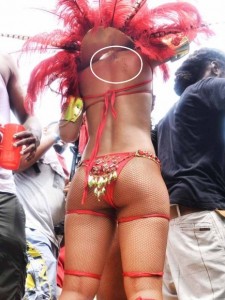 We know it’s tough, but try to peel your eyes away from Rihanna’s killer body for one second to check out the awesome tattoos featured in the Barbados parade pics. Rihanna has 16 tattoos to date and counting, although her two most recent tats were inked after the Barbados carnival pics were taken. Working from the top down, Rihanna has a Pisces sign tattoo behind her right ear, a string of stars inked down her neck and back, a star inside her right ear, and “rebelle fleur” tattooed on the left side of her neck. RiRi also has a Roman numeral tattoo inked on her left shoulder, “never a failure, always a lesson” tattooed on her right collarbone, and a red cross inked on her left collarbone. And that’s only the top half of her body!

Check Out More of Rihanna’s Tattoos 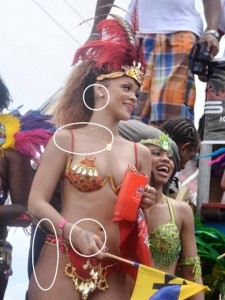 Rihanna’s best gal pal, Melissa Ford, has been in the news almost as much as Rihanna has these days. Check out pictures of the Barbados carnival, and you’ll see Melissa by RiRi’s side, dressed in an equally skimpy gold costume and joining the songstress in her scandalous behavior. More recently, Melissa Ford was spotted out on the town with Rihanna, which the pop star called her “first date in almost two years.” 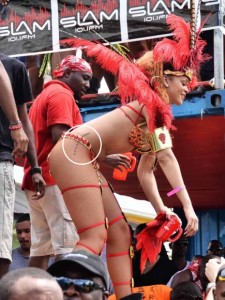 This tweet, along with RiRi’s message, “my lover for the night @mforde11” reignited rumors that Rihanna and Melissa are an item. This suspicion began when Rihanna’s Roman numeral tattoo on her shoulder was deciphered as the birthday of Melissa Ford, who the singer calls her “blood sister”; Melissa also has one of Rihanna’s birthday.