What do you get when you mix two party girls, alcohol, a creative idea and a tattoo parlor? Unoriginal copies of Rihanna’s tattoos! Controversial actress Lindsay Lohan and British singer Lily Allen stepped out on the town a while back with matching tattoos on their index fingers that read Shhh…. While this may have at first seemed like a cute and clever (and useful) tattoo design to other people, it’s obvious that the fingers tats are exact copies of the infamous Shhh… tattoo that Rihanna sports on her index finger. Read on to learn more about Rihanna’s most copied tattoos.

Plenty of wanna-be rock stars have copped Rihanna’s one-of-a-kind style, edgy haircuts and take-no-bullshit attitude. But not many people have made an attempt to copy one of RiRi’s most creative tattoos…except for Lindsay Lohan and Lily Allen, that is. After one of many long nights of partying, the troubled actress and British singer hit up an L.A. tattoo parlor at 2am and emerged with their own copies of Rihanna’s Shhh… tattoo on their fingers. Not just similar tattoos people, the exact. same. tattoo. in the exact. same. spot. That’s just plain old copying!

Back in June 2008, Rihanna hit up her favorite tattoo artist, Keith “Bang Bang” McCurdy, and asked him to scrawl a couple words across her middle and index fingers. Knowing a little bit about Rihanna’s style, she probably thought the Shhh… tat would come in handy in day-to-day interactions with people she didn’t feel like listening to. Little did the pop superstar know, the tattoos on her fingers would become a huge hit that other celebrities wanted to copy.

She should have known that nothing stays unique for long. Less than a year later, Lohan and Allen debuted exact replicas of Rihanna’s tattoo inked on the same fingers, courtesy of Shamrock Tattoos in West Hollywood.

Rihanna was one of the first stars to get a tattoo inked on the inside of her finger – which she claims was extremely painful – and the unique location has apparently been a big hit. 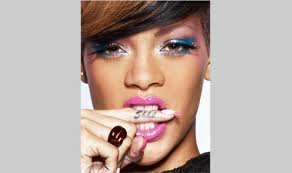 Since Rihanna’s Shhh… tattoo and Love tattoo on her fingers hit the web, other celebrities like Miley Cyrus and Demi Lovato have put their own spin on the finger tat idea, getting words and symbols representing peace, love, equality, karma and more. Even though Miley Cyrus may have gone a little overboard with the finger tattoo thing, you gotta give the girl credit for finding a permanent and unique way to express what she believes in. Lily Allen and Lindsay Lohan, however, just flat out copied RiRi’s Shhh… tattoo. We’ve got to ask girls, what gives?!