Y’all knew Rihanna couldn’t stay away from the tattoo parlor for too long! It’s already been three months since she debuted her Egyptian falcon tattoo on her ankle, after all, and she is a self-professed tattoo addict. While in London for her Paralympic Games performance alongside Coldplay, Rihanna opted for some new ink, this time as a tribute to her beloved grandmother Dolly, who passed away from cancer at the end of June 2012. Rihanna hasn’t revealed what her new tattoo looks like just yet, but stayed tuned, because we’re on the case and you’ll hear it here first!

Rihanna Gets a New Tattoo For Grandma on Her…??

Rihanna took advantage of her trip to London for the closing ceremony of the 2012 Paralympic Games by stopping in at the tattoo parlor and getting some new ink. RiRi was spotted leaving a tattoo parlor in London’s Soho neighborhood on September 8, and the stylish singer was sporting some tell-tale “new tattoo” bandages under her sweatshirt midriff top. Judging by the tattoo bandage, it appears as though Rihanna has added to her tattoo collection with a new piece on her ribcage that may even extend on to her stomach, just above her belly button. Rihanna is the queen of unique and interesting tattoos, and we can’t wait to find out what the singer’s new tat says!

We all know that Rihanna was hit hard by the death of her beloved grandmother, Ciara “Dolly” Brathwaite, who passed away earlier this summer after a long struggle with cancer. As Rihanna headed from the tattoo parlor to her car in London, a fan outside asked the Bajan beauty what her new tattoo was all about. Rihanna hinted that the mysterious tat was inked in memory of her late grandmother. “Rib cage! Got it for my guardian angel Dolly,” Rihanna replied. After the difficult passing of her grandmother, with whom she was very close, Rihanna posted this touching tweet: “Goodbye #grangranDOLLY get your beauty rest until I see you.” Now it seems like Rihanna thought words just weren’t enough. 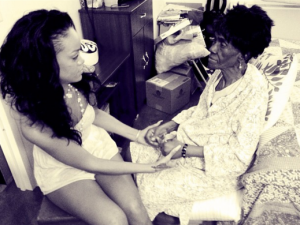 When Will We See Rihanna’s New Tattoo?

Although we haven’t yet seen what Rihanna’s new tattoo looks like, the pop queen’s traditionally skimpy style and upcoming concerts are sure to clue us all in soon enough! In fact, Rihanna is currently preparing for her “Princess of China” performance with Coldplay at Stratford’s Olympic Stadium today. We’re hoping she actually makes it to the show though, considering she skipped rehearsals after some late-night partying following her success at the VMAs. Hopefully RiRi will give us a glimpse of her new ink during the Paralympics show today!

Rihanna Blindfolds Melissa, Gets Her a Tattoo

The mysterious trip to the tattoo parlor wasn’t all about Rihanna though. Apparently, Rihanna wanted her best friend Melissa Forde to get in on the action too. But not in any normal way. Rihanna actually blindfolded Melissa and made her get a tattoo without seeing it until it was complete. Melissa later posted this message online: “Only Rihanna cud blindfold me n make me get a tatt n not see it till it’s done #trustlikenoother.” The girls also posted a pic of Melissa’s new tattoo – which says “Capturing Moments” on the outside of her left hand – on Instagram, along with this message from Rihanna: “That’s how real friends do!!! Hoes4life #capturingmoments.” Melissa and Rihanna are obviously the best of friends, since Rihanna also has a Roman numeral tattoo on her shoulder marking Melissa’s birthday.