One of Rihanna’s most controversial tattoos is a small handgun inked across her ribcage just below her right armpit. Rihanna’s side tattoo was done in March 2009 by the one and only Keith “Bang Bang” McCurdy, which seems awfully ironic, don’t ya think? According to Bang Bang, Rihanna flew the celebrity tattoo artist from New York City to L.A. and put him up in a swanky hotel just so she could get her gun tattoo. Well, the actual reason was so that Bang Bang could tattoo one of Rihanna’s friends for her birthday, but RiRi ended up getting inked as well, of course!

It seems like Rihanna has been considering a gun tattoo of some sort for quite a while, as sources say RiRi and Bang Bang’s collaboration of ideas for a gun tat took place over an entire year. One picture of the singer’s potential gun tattoo depicts a small handgun inked above each of her armpits, but a single gun was ultimately placed on her ribcage, presumably because the final location was more discrete. A Bang Bang quote suggests that CoverGirl was the reason the matching handguns were a no-go. I guess the image CoverGirl is going for isn’t exactly a handgun-toting bad-ass beauty. 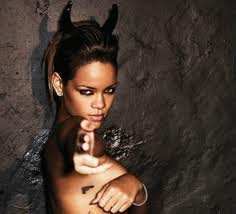 Rihanna’s gun tattoo was particularly controversial because it was inked in the midst of the abuse rumors involving Rihanna and ex-boyfriend Chris Brown. Some people think the singer’s gun tattoo is trashy and sends a bad message, but we think it’s pretty gangsta! In response to criticism about the singer’s “violence-themed” tattoo, Bang Bang asserted that Rihanna’s tattoo meaning simply represents strength and power. Rihanna has also been spotted wearing a small gun necklace, which some say was the inspiration for the cool side tattoo. 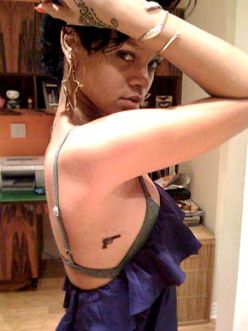 Shortly after Rihanna’s tattoo on her side was made public, pics of her tattoos showed a life-size pistol tattooed on her thigh. After serious speculation about RiRi’s new tattoos involving guns, the public was reassured: Rihanna’s leg tattoo was only temporary, and was stenciled on her thigh in preparation for her upcoming role in the flick Battleship. It’s clear that Rihanna loves tattoos and all her tattoos are a representation of some aspect of her life and personality. So, if RiRi wants to tattoo a huge gun on her thigh to show the world she has strength and power, we say go for it! We love Rihanna’s tattoos!