Rihanna showed more than skin in her exclusive February 2013 Rolling Stone photo shoot – she debuted a brand-new tattoo on her side as well! The previously unknown ink is located on Rihanna’s left ribcage and features a black and white portrait of the Ancient Egyptian Queen Nefertiti. The always sexy RiRi graced the cover of Rolling Stone magazine’s March issue, and the small side tattoo was featured in some “outtake” photos (ones that didn’t make the cut), which were released on February 4, 2013. Wondering why Rihanna chose Queen Nefertiti as the subject of her side tattoo? Nefertiti is one of the most famous women of the ancient world, and is still considered an iconic symbol of feminine beauty – much like Rihanna herself.

The Rolling Stone outtake photos were shot by the iconic Terry Richardson, who has photographed a number of other celebrities, including Megan Fox, Jessica Alba and Lady Gaga. In fact, Lady Gaga’s cherub angel tattoo on her neck was inked in memory of Terry Richardson’s mother, who passed away in September 2012. The steamy Rolling Stone pictures show Rihanna posing in a white leotard and silk dress, sporting a half-shaved hairstyle and smoking a blunt (of course). The Queen Nefertiti portrait tattoo can be seen on RiRi’s side just below her left armpit, in a spot where it’s probably almost always covered up. In addition to her Queen Nefertiti tattoo, you can also see her Roman numeral shoulder tat, her Goddess Isis tattoo on her chest and her tribal hand tattoo.

Rihanna Loves Her Some Egyptian Ink! 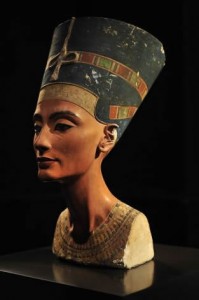 Rihanna’s Queen Nefertiti tattoo was obviously inspired by the infamous bust of the Egyptian queen, which was sculpted in the 14th century and is now housed in Berlin’s Neues Museum. Queen Nefertiti’s bust is so famous, in fact, that it’s one of the most copied works of Ancient Egypt! Oddly enough, RiRi’s Nefertiti tattoo isn’t the only Egyptian-inspired ink the pop star has gotten recently. Rihanna channeled Ancient Egypt in two other tattoos, both of which she got inked in 2012. First was the Egyptian falcon the singer had tattooed on the inside of her right ankle in June 2012, and then came the impressive Goddess Isis tat RiRi had inked across her chest just three months later. First a goddess and then a queen? Rihanna seems to think pretty highly of herself, and we certainly don’t blame her!

One Response to: Rihanna’s Side Queen Nefertiti Tattoo