One of Rihanna’s only tattoos that contains color is located on her left leg just above her heel. The tat is of a cartoonish skull and crossbones adorned with a cute pink hair bow. RiRi’s skull tattoo was inked during a stay in Miami in 2008 by a person the star calls “a great artist.” Little is known about Rihanna’s leg tattoo, but it seems to follow a pattern similar to many of her new tats. A skull and crossbones usually signals some kind of danger, but this hazardous element is neutralized by the pink hair bow the skull is wearing. Some of Rihanna’s other tattoos hint at the same idea of duality, like her Pisces tattoo behind her right ear and the “rebelle fleur” tattoo inked on the left side of her neck. So maybe Rihanna’s tattoo meaning is that she is tough and edgy, but also sweet and feminine at the same time!

Rihanna’s skull tattoo shows off the star’s bad girl attitude, a sentiment which may, like some of RiRi’s other tats, be shared by Chris Brown. Rihanna’s on-again, off-again boyfriend has a skull tattooed on both of his hands with a halo inked above each skull. Whether it has anything to do with Chris Brown’s hand tattoos or not, the pop star’s leg tattoo is adorable and really is the cutest of all her ink. One thing we know about the Bajan beauty is that she loves tattoos, which is obvious from all the pics of Rihanna’s tattoos out there. The singer’s leg tattoo is the seventh tat the sexy star got, and even though this seems like a lot, there is plenty of room for more, Rihanna! 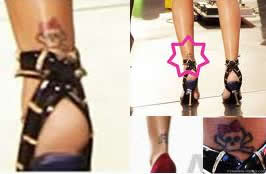