Rihanna got another finger tattoo in June 2008, this one on the index finger of her right hand, which reads “Shhh…” The singer’s “Shh…”tattoo is inked on the outside of her finger, so that she can shush someone without even having to say a word. Sounds like a tat that probably comes in pretty handy! The “Shhh…” ink is the second of Rihanna’s finger tattoos, which the star claims were extremely painful. Rihanna got quite a few new tattoos in 2008, but this finger tattoo is probably the most clever and unique. So clever in fact, that several celebrities, including actress Lindsay Lohan and British singer Lily Allen, have copied Rihanna’s finger tattoo, making it only slightly less unique. Way to go ladies.

There’s no denying that Rihanna loves tattoos and that most of RiRi’s new tats represent some important aspect of her life or her personal relationships. Rihanna’s “Shhh…” tattoo however, is probably just something the star thought would be funny and different. It actually is pretty funny to look at pics of the pop star’s tattoos and see the her (silently) shushing someone. There isn’t much involved in deciphering Rihanna’s tattoo meaning, and this tattoo probably doesn’t tell us much about the superstar, but it certainly does say something! 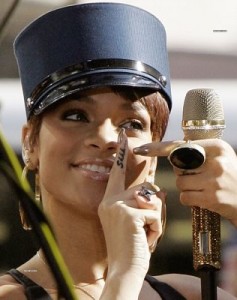