In case you were wondering what two words Rihanna would use to describe herself, wonder no longer! Rihanna got a new tattoo that reads “Thug Life” in capital letters across her knuckles, and she certainly seems serious about her tribute to the late Tupac Shakur. Pictures of RiRi’s new tattoo cropped up on the internet in addition to a tweet saying “All these bitches screaming that 2pac back #THUGLIFE” – lyrics to Rick Ross’ song “Tupac Back.” Rihanna’s new tattoo was reportedly inked today, January 25, 2012, by popular tattoo artist Mark Mahoney, who also posed for some post-tat pics with the Barbadian beauty. The tat was inked at Mahoney’s Shamrock Shack tattoo parlor in L.A. Rihanna loves tattoos and her new thug life tat adds to an already impressive collection of ink the superstar has. But just to make this new tattoo especially unique, Rihanna got the tat inked in white!

The obvious meaning of Rihanna’s knuckles tattoo is a tribute to Tupac, who formed the rap group Thug Life in 1993. The well-known rapper also had the words “thug life” inked across his stomach before he was killed in a drive-by shooting in 1996. According to one source, the term “thug life” represents the opposite of an individual having everything he or she needs to succeed. Thug life is when you have nothing and you still succeed, having overcome all the obstacles to achieve your goals. The eldest child of a Barbadian father and a Guyanese mother, Rihanna – born Robyn Rihanna Fenty – has confessed to watching her father struggle with a crack addition as a young child. Rihanna has also recounted instances when, as a child, she was beaten by her drunken father. Being the international superstar that she is today, it certainly seems like Rihanna has risen up in the face of adversity and lived up to the meaning of a “thug life.” 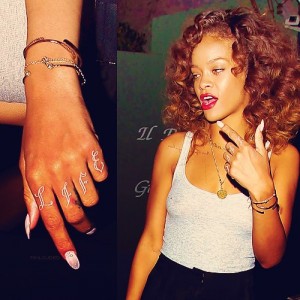 There is quite a buzz about RiRi’s new tattoo, not only because of the tattoo meaning, but because the star may have actually gotten another tattoo during the “thug life” session. Rihanna posted additional pictures of her laying down on her stomach while Mahoney seemingly worked on a new tattoo on her lower back. Pictures of Rihanna’s tattoo sesh show the superstar lounging while drinking a beer, seemingly unconcerned about adding what would be her 16th tattoo to her body. RiRi also posted on Twitter, “My boo Mark Mahoney! #RockstarS*** #TATnight.” If the singer’s back tattoo is real, it would accompany the string of stars tattoo that Rihanna has inked on her neck and back, as well as more than a dozen other tattoos the singer has on her body. Unfortunately, Rihanna hasn’t yet posted pictures of the back tattoo, so we are waiting on the edge of our seats!