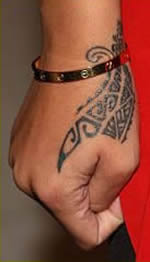 Rihanna’s eleventh tattoo is a geometric tribal tattoo that the star got while in New Zealand during her November 2008 tour. The most intricate of Rihanna’s tattoos, her hand tat is a henna-style dragon claw complete with tiny little hibiscus flowers that extend up her wrist. RiRi’s wrist tattoo is a traditional tat done in the style of the Maori people of New Zealand, and represents aroha (love) and mana (strength). The exotic tat was imprinted on her skin in the traditional method of tattooing unique to the Maori people, and extends from her wrist all the way past her thumb and towards her right index finger. The Maori people of New Zealand use uhi, or chisels, to impress inked grooves into the skin, rather than piercing it with needles and ink. This method of tattooing makes the skin appear raised and rough, rather than smooth. For most people, this potential for serious pain would definitely make them change their minds, but not our Rihanna!

Meaning behind the Dragon Claw Tat

Rihanna has admitted that tattoos are a sort of addiction for her, but assures her fans that her tattoos are primarily inspired by fashion and her personal style. The pop princess now has more than a dozen tats in different places on her body, and all of her tattoos are either symbolic in some way or simply represent something she likes. By adding a tattoo to her body that represents strength and love, we get to learn a little bit more about Rihanna as a person. Not only does she consider herself a strong woman, but she has a softer side as well. Perhaps this tattoo representing love and strength was influenced by a particular person who is important to her, since Rihanna’s hand tattoo does seem to match a similar one Chris Brown got while the on-again, off-again couple was in New Zealand together in 2008.

All RiRi’s tattoos are unique to her style and personality, but the Maori-inspired geometric tattoo is particularly distinctive in its design. Pics of Rihanna’s tattoos show the beautiful Barbadian music icon fashionably dressed – as always – with the tribal hand tattoo as a perfect accessory. The songstress says she is very particular about the tattoos she gets and always chooses something with meaning to her personally. 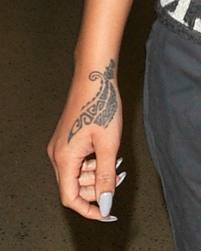 The distinctive nature of the singer’s wrist tattoo really says a lot about Rihanna and makes you appreciate the her dedication to the bodily art form of tattooing; she clearly didn’t get the tattoo to look cute and girly – it’s bad-ass! You have to give Rihanna credit for handling that kind of pain just for a bit of ink. “I always wanted one,” the superstar says of the Maori-inspired tribal tat, “but it hurt like hell!” Clearly, Rihanna loves tattoos!