Rihanna must be in an Egyptian kinda mood these days. The Barbadian singer sparked quite a bit of debate yesterday when she was spotted leaving a tattoo parlor in the Soho neighborhood of London with tattoo bandages covering her stomach and chest. After the much-talked-about kiss between Rihanna and ex-boyfriend Chris Brown at the VMAs, everyone probably thought RiRi had gotten a tattoo tribute to the man she says is the love of her life. That’s certainly not the case though, as Rihanna told a fan outside the tattoo parlor that the new ink was a memorial to her beloved grandmother, Ciara “Dolly” Brathwaite. “Rib cage! Got it for my guardian angel Dolly,” Rihanna said yesterday, but she didn’t give anyone a glimpse of her new chest tattoo…until today.

Rihanna took to Instagram to show off her new chest tattoo, an impressive portrait of the goddess Isis inked across her ribcage, just below her breasts. The tattoo is rather large and portrays Isis kneeling upright, with her head landing right in the center of Rihanna’s chest, and her long graceful wings following the curve of the singer’s breasts. Along with the picture, RiRi included the message: “Goddess Isis – Complete Woman – Model for future generations – #GRANGRANDOLLY – always in and on my heart #1love.” Rihanna obviously had a very close relationship with her grandmother, who passed away from cancer in a New York hospital earlier this summer.

After her grandmother died in July, Rihanna posted a string of emotional tweets online – a rare glimpse of grief from such a notoriously bad-ass woman. “Words can’t explain the essence of her beauty,” Rihanna wrote. “You and you alone no other one.” And also, “Goodbye #grangranDOLLY get your beauty rest until I see you.” Later on, while she was vacationing back home in Barbados, Rihanna tweeted, “#grangranDOLLY? I know you smiling down on me brightly, I could feel it in the sunshine ?#1Love? Forever.” Now that she has this new chest tattoo Rihanna can probably feel confident that she has given her grandmother the tribute she deserves. 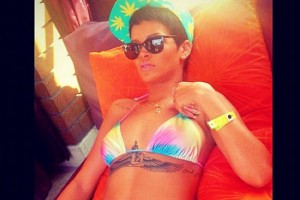 Among the ancient Egyptians, the goddess Isis was worshiped as the ideal mother and wife, as well as the patron of magic and nature, and she was the friend of sinners, slaves, artisans and the downtrodden. According to ancient Egyptian mythology, Isis is often depicted as the mother of Horus, the hawk-headed god of war and protection. She is also known as the protector of the dead and the goddess of children. The actual name “Isis” means “throne,” and the goddess is commonly depicted as a symbol of the pharaoh’s power. According to this interpretation of the Egyptian goddess Isis, Rihanna seems to have honored her grandmother in the most flattering of ways with her new chest tat.

Rihanna has quite a few tattoos – all of which are interesting and uniquely her own – but her two most recent tats seem to have a common theme. Back on June 16, 2012, Rihanna debuted some new ink on her ankle – an Egyptian falcon tattoo in the shape of a handgun. Of course, Rihanna fans immediately thought that the singer’s ankle tat was alluding to violence, given the tell-tale shape of the falcon and her other tiny handgun tattoo on her side. In reality, RiRi’s falcon tat was inspired by a 2,300-year-old faience falcon on display at the Metropolitan Museum of Art in New York City. After displaying her new tattoo online, RiRi explained: “Falcon: a light that shines in the darkness! Never close their eyes during sleep.” Along with her new Isis tattoo on her chest, Rihanna seems to have embraced the ancient Egyptian tattoo theme yet again.