Whether it’s a serious Miley Cyrus obsession in the form of 17 Miley-inspired tattoos or creepy fan tats of Justin Bieber and Demi Lovato – trust us, we’ve seen it all. Every once in a while though, it’s nice to catch a glimpse of some fan tattoos that don’t belong in the Tattoo Hall of Shame. So, for your enjoyment, we have compiled a few of the most bad-ass Rihanna fan tattoos out there, including a portrait that even RiRi herself should be proud of. Check out the following tats inked on Rihanna super fans and tell us what you think of the Caribbean Queen in ink form!

Rihanna was recently voted one of Time magazine’s 100 most influential people in the world…and for good reason. Not only is the Bajan pop star beautiful, talented and successful, but she is also so respected and admired that fans are willing to get permanent tattoos dedicated to her inked on their bodies. Now, there are plenty of people out there who have gotten tattoos of the names and even the faces of their favorite celebrities and artists, but you’ve got to admit, they usually turn out pretty awful. Not fan tattoos of Rihanna though. RiRi has established herself as a music, fashion and tattoo icon, and obviously isn’t afraid to share her bad-ass personality with the world, which has convinced her most devoted supporters to get Rihanna-inspired tattoos. And we have to say, they are pretty kick-ass!

We’ll start with the most innocent of Rihanna’s fan tattoos. A person that can only be described as a “Stan” decided to get a large “R” inked on the right side of her neck, in the style of Rihanna’s fourth studio album, titled Rated R. According to British artist and director Simon Henwood, the “R” logo included on the album cover “is a two edge sword […] one side symbolizes strength and the other vulnerability.” He goes on to say, “I designed it as a 3D object first that changes form in rotation as an animation – it forms the logo shape at the end of the loop.” Not only did this female Rihanna fan get a tattoo on her neck in honor of the pop star, but she also got the chance to show it off to Rihanna in person. Check out the pic of the singer’s first glimpse of the neck tattoo – she looks just as surprised as we are!

Another serious Rihanna supporter admired the cover of the singer’s Rated R album, but decided to take the tattoo one step further with a full-on Rihanna portrait. This fan got the entire photo from RiRi’s fourth studio album inked on her right arm, and we’ve got to admit, the tat is pretty dead-on. The cover of RiRi’s album features the singer in a moody, contemplative pose with a rock-and-roll hairstyle, heavy eyeliner and dark lipstick. In the photo, Rihanna is wearing a leather top and is covering her right eye with her right hand, her fingers riddled with silver rings. This chick’s arm tattoo features that very same Rihanna pose, with the “R” logo inked in the upper-right corner of the tattoo, and “Rihanna” inked in scrolling letters below the singer’s portrait. All in all, this Rihanna fan tat gets an A for awesome. 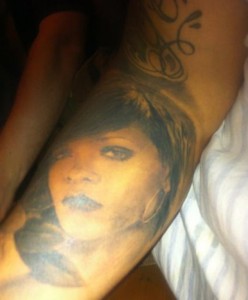 We saved the best fan tattoo of Rihanna for last. A female fan of the Bajan beauty hit the tattoo parlor and got what can only be described as an exact replica of Rihanna inked on her forearm. The quality black and white portrait is instantly recognizable as Rihanna, which is more than we can say for some of the creepy tats fans have gotten of Demi Lovato and Justin Bieber. In the arm tattoo, the singer poses with her signature pout and sexy stare, with big hoop earrings and her bangs swept to one side. The fan, named Emily Luke-Taylor, posted the pic of her awesome Rihanna tattoo on Twitter, along with a shout-out to the singer: “@rihanna LOOK AT WHAT TATTOO I GOT OF YOU!!!” The picture was retweeted by Rihanna, who added only the hashtag “#ILL.” She was obviously impressed!