Most people choose something small and at least semi-discreet for their first tattoo, but pop star Shawn Mendes really went for it with his inaugural ink – an intricate piece highlighting his love for music, his family and his hometown of Pickering, Canada, located just outside of Toronto. Shawn Mendes’ tattoo was done on June 27, the day before he graduated high school, and depicts a large image of a guitar on his right forearm, made up of several interior images, all done in black and gray, including trees, a lake, and a tiny replica of an iconic Toronto landmark – and one of Drake’s favorites – the CN Tower.

As opposed to the random Chinese symbols and other regrettable ink that typically result from a person’s first trip to the tattoo shop, Shawn Mendes’ tattoo is an incredibly sentimental and well-thought-out piece that combines all of the 17-year-old’s favorite things into one remarkable design. Beginning at the neck of the guitar, you can see a silhouette of the Toronto skyline and the CN Tower, a communications and observation tower in downtown Toronto, nestled among a series of soundwaves that look like buildings but, according to Shawn himself, are “actually an audio of my parents saying, ‘I love you.’”

The body of the acoustic guitar in Shawn Mendes’ tattoo is made up of a stand of trees reflecting in a serene lake, which could represent Lake Ontario, another Canadian landmark and one that holds an important meaning for Shawn, who grew up in Pickering, a city located in Southern Ontario, immediately east of Toronto. Overall, the obvious meaning behind Shawn Mendes’ guitar-shaped tattoo is his love of music, which has had a big impact on his life as a teenager. According to Shawn, who got his big break after releasing a six-second Vine video of himself singing Justin Bieber’s “As Long As You Love Me,” he wants to be the next Ed Sheeran. “His whole style is not fake at all,” he says. “That’s how I want to be.” 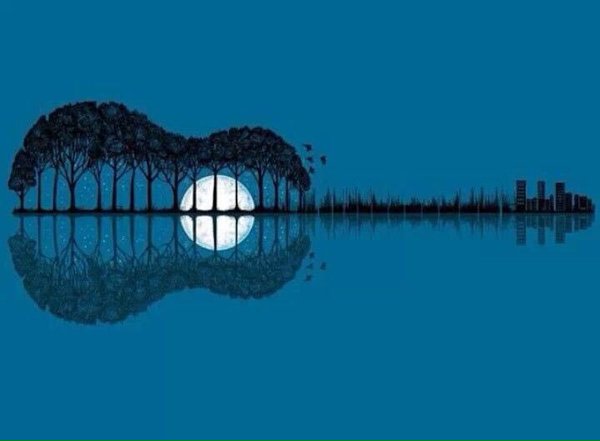 It was Shawn Mendes’ tattoo artist, Livia Tsang of Chronic Ink Tattoos in Toronto, who debuted the “Stitches” singer’s first-ever tat on Instagram, captioning the photo, “Look who came to get tattooed today! Thanks @shawnmendes for being a gem.” Later that same day, Shawn confirmed on Twitter that he had gone under the needle, writing to his more than seven million followers, “Haha you guys are funny. Yes I got a tattoo, thank you for all the nice comments. @liviatsang is the best.” Livia followed that up with an Instagram photo featuring Shawn’s completed tattoo, captioning the snap, “Close-up of @shawnmendes’ tattoo. Yes, it is real, and no, he didn’t cry.” Good to know!

One Response to: Shawn Mendes’ First Tattoo is a True Work of Art