Taylor Swift may be a megastar in the music world, but that doesn’t mean she has any less time to devote to her die-hard fans. During an impromptu meet-and-greet backstage at one of Taylor’s shows, 19-year-old fan Alanna Anuszewski, a sophomore at The College of Saint Rose in Albany, New York, had a dream come true. She explained to Taylor Swift that she had gone through a tough time last year, and that the singer’s 1989 album helped get her through it. So, she was wondering, would Taylor be willing to write down an inspirational quote that she could make into a tattoo??

Long story short, Taylor Swift obliged, and wrote down the lyrics, “…But she found herself, and somehow that was everything,” from the song “Clean,” off her 1989 album. “I wasn’t going to get the tattoo unless it was in Taylor’s handwriting. I didn’t think it would actually happen. After every show, Taylor’s mom picks out some really enthusiastic fans to meet Taylor. I didn’t think I’d get picked, but I did. Meeting her was so surreal. She talked to my friend and I for five minutes.” True to her word, after meeting Taylor and asking her to write her a message, Alanna got the inspirational phrase “…But she found herself and somehow that was everything” inked on her side in Taylor Swift’s handwriting. 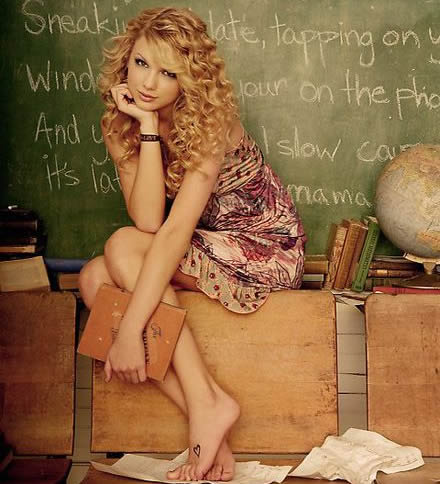 Alanna posted a photo of her Taylor Swift tattoo on Instagram last week, captioning the snap, “still can’t believe @taylorswift wrote this out for me & now it’s tattooed on my body forever.” Taylor Swift may not have any tattoos of her own, but we’re guessing that the singer would probably be pretty humbled to find that a fan struggling with personal issues drew inspiration from her 1989 album, so much so that she got a lyric from one of her songs permanently tattooed on her body. We have to admit, we love this inspirational Taylor Swift-inspired tat, and we love all that the singer does for her fans!