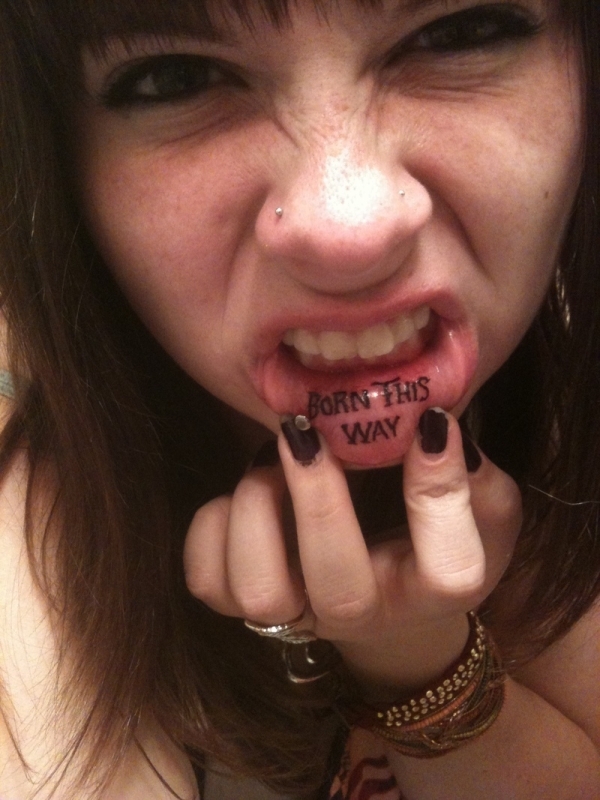 Lady Gaga went and got a “Little Monsters” tat inked on her arm to honor her followers, and now fans of the infamous pop star are going “gaga” over their own tattoos of the singer. This chick in particular really went for it and got “Born This Way” inked in black on the inside of her lower lip in capital letters. You know a lip tattoo’s gotta hurt, but from the look of her tat and nose piercing, this girl isn’t afraid of a little pain if it means making a statement. And getting a tattoo of Lady Gaga’s album title inked inside your lip definitely makes a statement.

Every once in a while a random tattoo of a celebrity’s portrait will crop up on the web, whether it’s of Mike Tyson, Will Ferrell, or, regrettably, the Fonz. And you may have heard about the so-called “Beliebers” who have gotten tattoos of Justin Bieber inked on their bodies recently (because really, who doesn’t want to immortalize a Canadian tween on their body for the rest of their lives?) But not a single celebrity can compete with the wave of Lady Gaga-inspired tattoos that have taken the world by storm lately. Lady Gaga fans are fierce and proud, and they are certainly not afraid to devote a section of their body, however small or large, to the queen of pop.

Tattoos of Lady Gaga – A Revolution

From simple tats of her name, to reproductions of her lobster claw shoes, to impressive likenesses of the risqué performer, Gaga tribute tats are becoming more and more popular among the star’s wild fans. We all know that Lady Gaga loves tattoos and that she has devoted her body (well, half of it at least) to all kinds of tributes, honoring different people she respects and expressing a little bit about herself in the process. Well, her fans have decided to do exactly the same for her. Lady Gaga calls her fans a “revolution,” and they are definitely revolutionizing the concept of fan tattoos.