Chris Brown’s tattoos on his chest, arms, back, neck and legs have grown in number so quickly, that it’s getting hard to keep track of them all. Lucky for you, we’ve done all the research for you, and included right here everything you need to know about each and every Chris Brown tattoo and the meaning it holds for the singer. Curious about the dozens of tattoos that make up Breezy’s impressive sleeves on his right and left arms? Wondering what Chris Brown’s very first tattoo was? We’ve got all that info for you right here. There’s no doubt about it – Breezy loves tattoos, and he’s sure to continue adding new ink to his collection in the near future. So, be sure to check back with us to keep up on Chris Brown’s tattoos and their unique meanings! 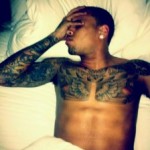 Breezy’s chest tattoos have drawn lots of attention from fans and paparazzi since the R&B star loves to perform without a shirt on. But who’s complaining? Chris Browns chest tattoos really accentuate his muscular chest and meet up with his arm tattoos, which cover the majority of his left and right arms. The singer’s chest tattoos include a “symphonic love” tat with roses inked over top of a diamond, and a wings tattoo with four stars inked on his pecs. See more pics & read about the meaning and story behind his chest tattoos…read more 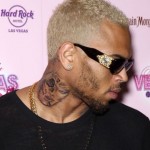 In 2008, Chris Brown got a trio of stars inked on his neck as a matching tat with then-girlfriend, Rihanna. The singer’s neck tattoo matched a cluster of stars Rihanna got inked on the back of her neck, and the stars tattoos were reportedly meant as a symbol of the couple’s undying love. Unfortunately, the two celebrities have since called it quits, as many do, and Rihanna had her stars tattoo altered shortly thereafter. The Chris Brown neck tattoo however, remains just the way it was when the two were together, sparking rumors that RiRi and Breezy may not really be done for. We smell a reunion! See more pics & read about the meaning and story behind his neck tattoos…read more 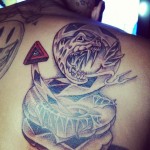 Adding to his rapidly growing collection of tattoos, Breezy has begun to add body art to his back, which was previously untouched by ink. Two Chris Brown back tattoos include a crazy looking evil / morbid smiley face with a skeleton smile underneath and two feathers that criss-cross above the smiley face tat. While his back tattoo featuring feathers may represent spirituality or a symbol of the soul, it’s really anyone’s guess as to what Chris Brown’s smiley face tat stands for. Our bet is that its something to do with evil hiding under a smiling face, there are certainly many examples if this in the music industry! See more pics & read about the meaning and story behind his back tattoos…read more 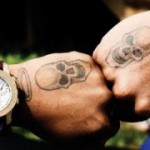 Breezy’s arm tattoos don’t stop at his wrists; the R&B star has even added some ink to his hands, even though it seems like one of the most painful spots to get jabbed with a needle. Chris Browns hand tattoos clearly mean something important to him from what he has said about them, and they include his mom’s name inked in script, a skull with a halo above it, and a traditional Maori tattoo that matches ex-girlfriend Rihanna’s tribal dragon claw tattoo. See more pics & read about the meaning and story behind his hand tattoos…read more 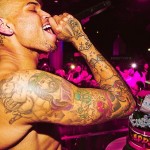 Since he was 13, CB has gradually added more and more arm tattoos to his collection, creating the two full arm sleeves he currently has. If you look at pictures of Chris Brown sleeves tattoos, you can see that he has dozens of tattoos on his right and left arms, many of which are very important to the singer/actor. It’s obvious that Chris has put a lot of thought into his sleeve tattoos, and we don’t blame him. Tattoos say a lot about the wearer, and Chris Brown clearly has a lot to say! See more pics & read about the meaning and story behind his sleeve tattoos…read more

Chris Brown is quickly running out of real estate on his arms, neck and chest, so it comes as no surprise that the singer has begun to fill up his legs and feet with tattoos as well. The first of Chris Brown’s leg tattoos featured a large bird on his shin that Breezy may or may not be a fan of since he rarely shows off the ink in public. From there, the singer went on to get a large “X” crossbones inked on the top of his foot, and so the extensive Chris Brown tattoo collection continues. See more pics & read about the meaning and story behind his leg and foot tattoos… 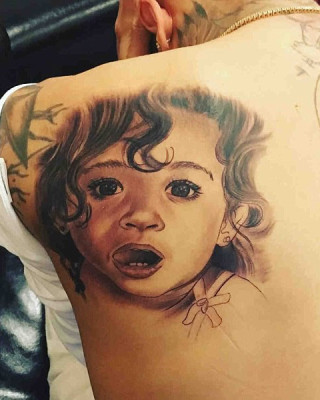 Chris Brown’s Newest Tattoo is a Huge Portrait of His Daughter, Royalty 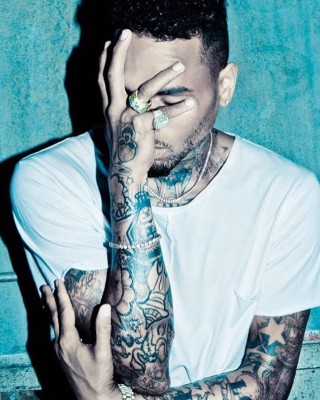 Chris Brown Got in Trouble for Getting First Tattoo at 13 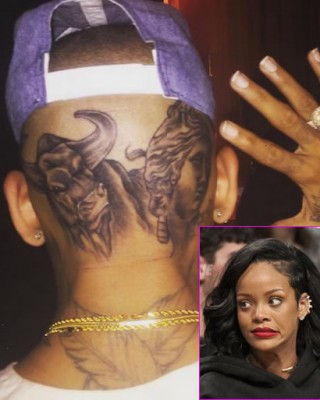 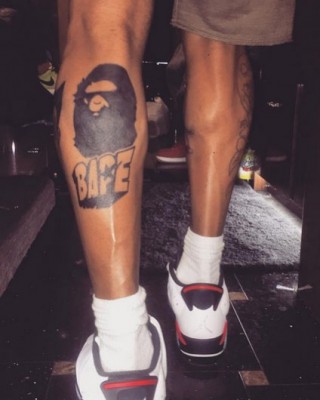 Chris Brown Gets FOUR New Cartoonish Tattoos on His Legs 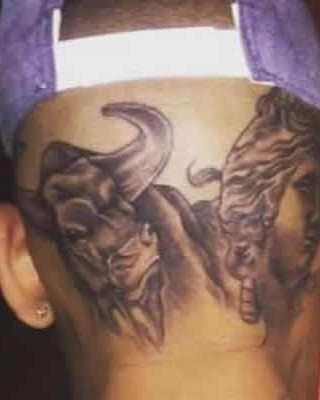 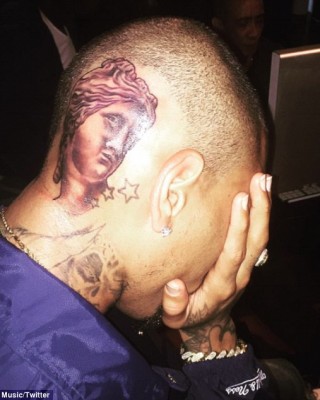 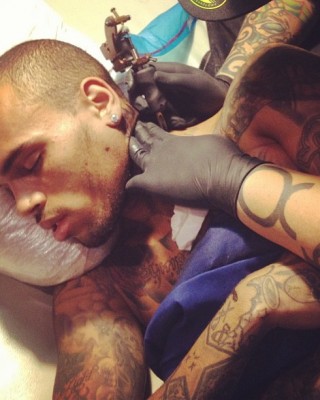 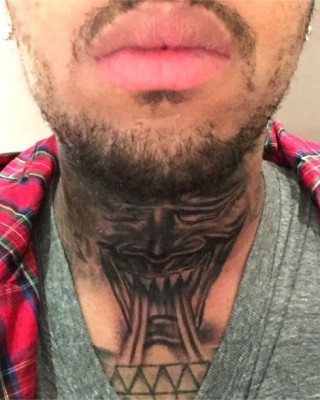 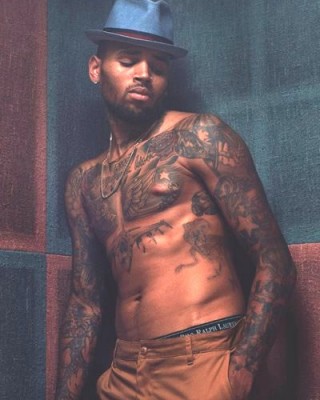 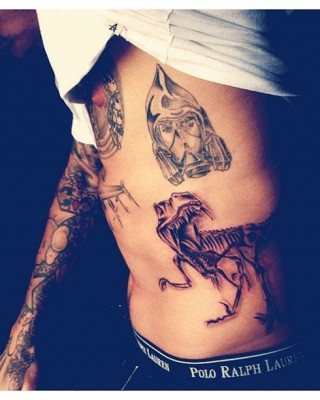 Chris Brown Reveals Gigantic Dinosaur Skeleton Tattoo on His Side! 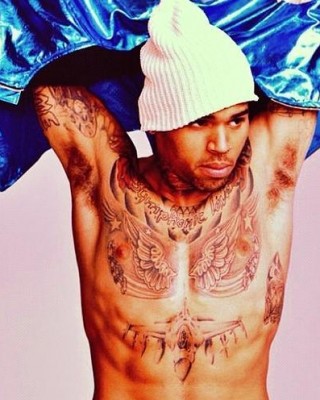 Chris Brown’s Birthday Coming Up – Will He Get Inked for the Big 2-4? 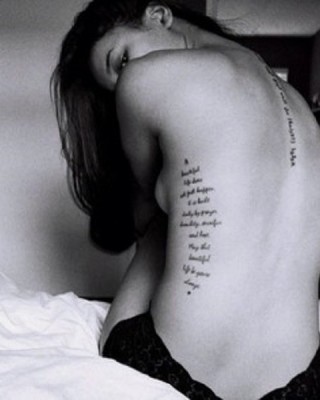 Do You Think Karrueche Tran’s New Risqué Tattoo is Meant for Chris Brown? 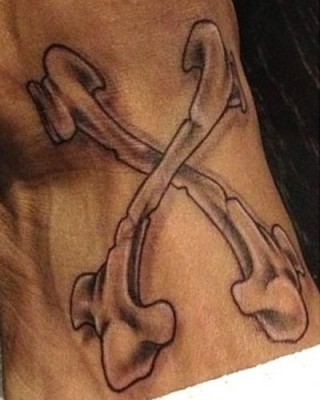 Chris Brown Gets an “X” Tattoo on His Foot, Crossbones Style! 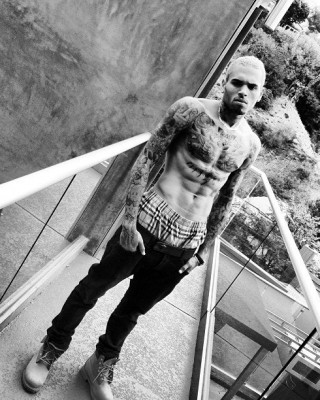 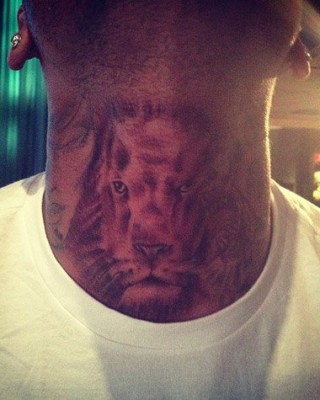 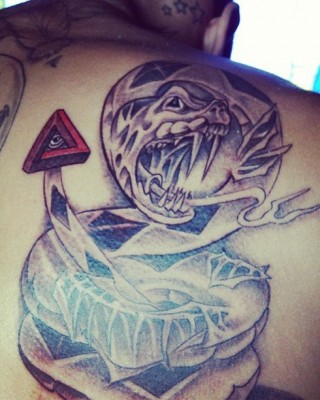 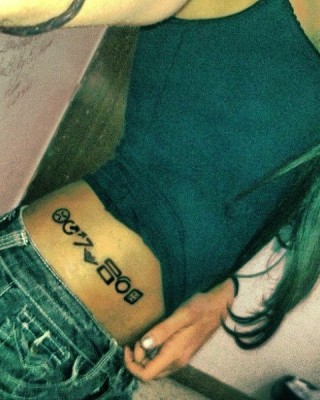 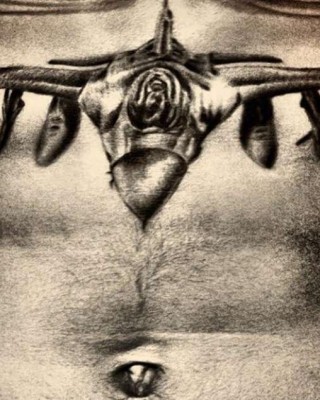 Breezy Gets a New Tattoo in the Same Spot as Rihanna’s New Ink! 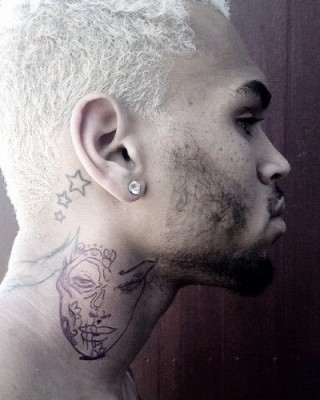 U.K. Man Gets Chris Brown’s Face Tattooed on His Back