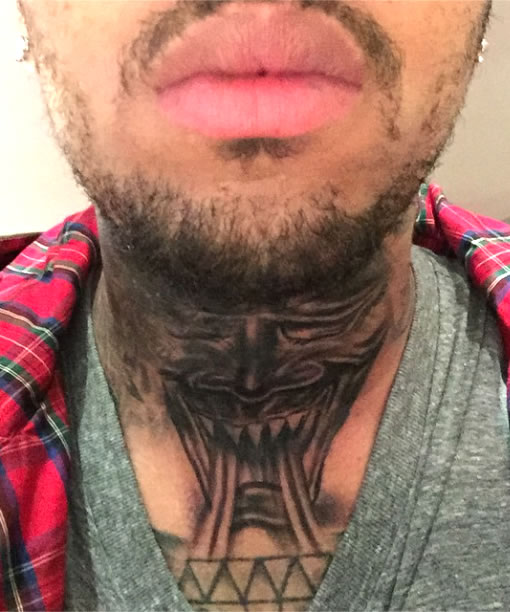 Following months of speculation, Chris Brown recently announced his Between the Sheets tour to promote his latest album, X, which he will be co-headlining with Trey Songz, and the singer apparently celebrated by going under the needle for a brand-new tattoo on his neck featuring a pretty scary-looking devil face. Chris Brown’s new devil tattoo in the center of his throat covers up the fierce lion head ink he added to his neck in October 2012, in the midst of the infamous Chris Brown-Rihanna-Karreuche Tran love triangle, and looks like it could have been designed after some sort of evil tiki dude.

When Chris Brown first revealed his lion neck tattoo in 2012, we thought it was pretty ballsy that he let someone tattoo directly on his throat. That must have hurt pretty bad, right?? Well, as it turns out, Breezy must not have been pleased with his lion tattoo (or else he really just enjoyed the pain), because he’s gone under the needle yet again and had it covered up with a creepy-looking devil face tat. Chris Brown’s tattoo is inked in black and white, and features an evil devil face complete with fangs and lines coming out of his mouth that make it look like he spit out the diamond in Breezy’s “Symphonic Love” chest tattoo.

Besides the fact that Chris’ new devil tattoo looks like it was drawn by some middle-school kid, it seems odd that the singer would choose to cover up his lion tattoo, which was very well done and appeared to symbolize courage and strength, two things Breezy is going to need if he plans to climb out of the hole he’s dug himself into recently. And if he was going to cover up one of his neck tattoos, shouldn’t it have been the tattoo of a woman’s face that got Chris Brown in so much hot water due to the fact that it bears a striking resemblance to the police photo of a beaten Rihanna after she was assaulted by her then-boyfriend in 2009?

Whatever his reasons for getting a cover-up tattoo on his neck, we have to admit, we liked Chris Brown’s lion tattoo better than this new devilish ink. What do you all think?