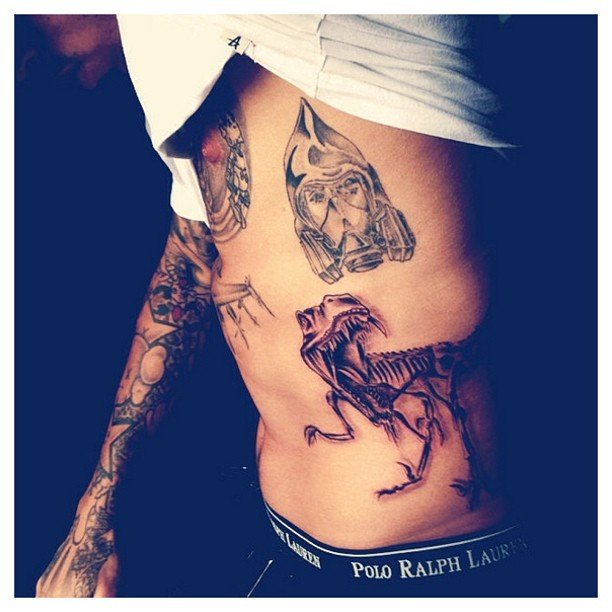 Chris Brown has been relatively quiet on the tattoo front these days, but the controversial singer is back in business now, having just revealed a huge dinosaur skeleton tattoo on Instagram on July 17. The new tattoo is inked in black and white on Breezy’s left side and features a gigantic image of a fierce T-Rex skeleton, who looks like he means business! The dinosaur tattoo joins two other large tattoos Chris Brown has added to his abdomen in the past year – the “Bandit” tat below his left armpit and the fighter jet tattoo located in the exact same spot at Rihanna’s Goddess Isis chest tat. Chris Brown’s T-Rex tattoo comes on the exact same day Justin Bieber debuted the creepy all-seeing eye tattoo he got inked on his left arm, and amid news that on-again, off-again girlfriend RiRi is planning some new ink of her own. What do you think of Breezy’s cool new T-Rex tattoo?

The lion may be the king of the jungle, but the T-Rex was definitely the baddest dinosaur there was, right? So are you surprised Chris Brown immortalized the T-Rex in a tattoo? We’re not. After all, T-Rex is one of the largest of the known carnivorous dinosaurs, and it’s full name – Tyrannosaurus Rex – literally means “king of the tyrant lizards.” Despite its tiny and seemingly worthless arms, the T-Rex was a pretty serious predator – able to run at speeds of up to 15 mph when pursuing prey, even though it weighed between five and seven tons. Check out Chris Brown’s tattoo and you’ll see the T-Rex’s notoriously vicious jaws and skull, which the dinosaur used to crush bones and bore into its kill. Needless to say, the Tyrannosaurus Rex was a pretty bad-ass dino, and Chris Brown’s side tattoo may be the singer’s means of proclaiming himself the king of the beasts.

Breezy “Fighting Back” With Fierce Tattoos?

There’s no question that Chris Brown has found himself the subject of some serious (and mostly negative) media attention over the years – the most recent involving an alleged hit-and-run accident which landed the singer back in court this month. Ever since he was arrested for physically abusing then-girlfriend Rihanna in 2009, Breezy has been embroiled in an ongoing fight to restore his reputation – one that the pop star appears to be narrating through his tattoos. Since June 2012, Chris Brown tattoos have had seemingly aggressive themes, which could be a way for the controversial singer to “fight back” at all his haters – and there are plenty! In addition to the new dinosaur skeleton tattoo on his side – which looks like it is poised and ready to fight – Breezy has also inked an Indian chief wolf tattoo on his neck, a rattle snake tattoo on his back, a fighter jet tattoo on his chest and a lion tat on his neck. We’re sensing a theme here…