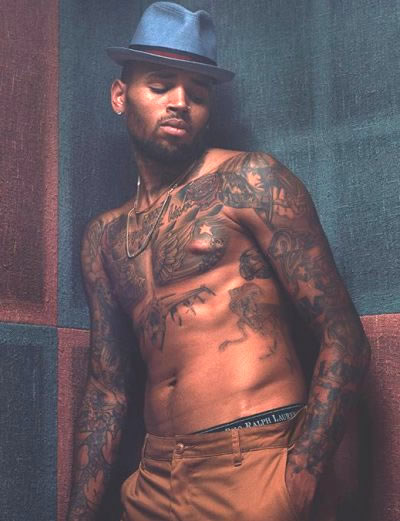 During a recent interview with The Guardian, R&B star Chris Brown fiercely defended the controversial tattoo of a woman’s face he has inked on his neck and addressed the public (and not so positive) attention his collection of tattoos has earned him over the years. His main point? “I really don’t care. A tattoo’s a tattoo; it’s my body, my skin.” Don’t mistake his brush-off as an indication that he doesn’t care about the ink though; Chris Brown’s tattoos are a huge part of his appearance and their meanings are as personal to him as his on-again, off-again relationship with Rihanna. Speaking of which, let’s get back to that infamous neck tattoo…

Back in September 2012, Chris Brown debuted the beginnings of a tat on the right side of his neck that resulted in a very public uproar over what appeared to be a portrait of a bruised and battered Rihanna. Remember, besides his tattoos and music, Breezy is most famous for beating the heck out of his then-girlfriend Rihanna in 2009, and the fact that his neck tattoo resembled the police photographs of the assault was beyond comprehension for most people. Despite the fact that both the singer and his tattoo artist have since claimed that the tat of a woman’s face was actually inspired by a MAC cosmetic advertisement featuring a Mexican Day of the Dead mask, pretty much everyone is still unconvinced.

You’d think that the fact that Chris Brown’s adult years have pretty much been defined by his attack on Rihanna would make him at least a little more subdued, but no. “My favorite line is, ‘Fuck you,’” the pop star revealed during the Guardian interview. “I like giving the world a big fuck you. Every tattoo I have is a big fuck you. So it’s just, like, this is just me, and I’m the guy who’s going to be just the same guy at all times.” It’s no surprise that the interviewer became slightly confused at this point in the conversation, asking Breezy why he got a tattoo of Rihanna’s face after cl

aiming that he’s changed. Chris Brown’s response: “No, I think you misinterpret what nature that is. You think the tattoo is Rihanna’s face, but it’s not. I’ve just cleared this up, this is not Rihanna’s face. I just got a tat. Like I say, a tat is on my body, so it’s personal. I liked how it looked, so I thought I’d get it done. It’s all good.”

Since getting the controversial neck tattoo in 2012, Brown has added quite a few other pieces to this body, including a fighter jet tattoo on his chest, a neck tat of a lion, and a huge dinosaur tat on his side. Is it just us, or do all of these tats represent some form of violence or aggression, hinting at the inner turmoil Chris Brown continues to struggle with? Struggle or not though, the pop star doesn’t plan to let public opinion influence his tattoos, relationships or life in general any time soon. “I’m not going to walk around every day of my life depending on the opinions of other people,” he said during the interview. “Because if I do that, I’ll just be trying to please everybody and that’s not what I’m here for. Just make music. If they like it, they like it. If they don’t, fuck you.”