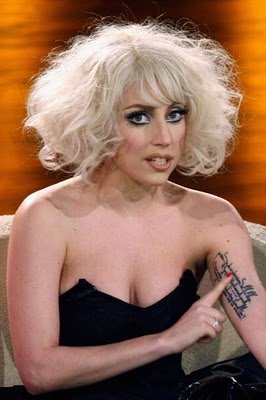 One of Lady Gaga’s most visible arm tattoos features a quote from “Letters to a Young Poet,” written by Rainer Maria Rilke, along with the date 12/18/1974. Rilke is a German poet and is reportedly Gaga’s favorite philosopher, which explains the singer’s tattoo tribute to the writer. The German arm tattoo is pretty large, reaching from her elbow almost to her armpit on the inside bicep area of her left arm.

Lady Gaga’s arm tattoo is designed in a curling script, and, although there is much speculation about what 12/18/1974 could mean, it is actually the date that Gaga’s aunt, Joanne Germano, died of lupus. Even though Joanne died before she was born, Lady Gaga says she has always felt a strong connection with her aunt, who she calls an artist. While in Seoul in 2009, Gaga showed friends her arm tat, which she had inked in a midnight session at a Japanese tattoo parlor in Osaka, where she toured before arriving in Seoul.

Referring to the inspiration behind her large arm tat, Lady Gaga says that Rilke’s “philosophy of solitude” spoke to her. She believes that solitude is “something you marry, as an artist. When you are an artist, your solitude is a lonely place that you embrace.” The singer’s Rilke tattoo was inked in Osaka, Japan on August 6, 2009 and reads in German:

The tattoo translates into the following in English:

In the deepest hour of the night,

Confess to yourself that you would die if you were forbidden to write.

And look deep into your heart where it spreads its roots, the answer,

and ask yourself, must I write?

It’s obvious that Gaga is inspired by Rilke’s work, so much so that she had some of it inked on her body permanently. Some people say that much of Lady Gaga’s work is inspired by the German poet and philosopher, citing Rilke’s “Sonnets to Orpheus” as an example. Gaga and Rilke seem to have very similar philosophies, and, although they have done very different things with them, they have both come to the conclusion that “Gesang ist Dasein,” or “Voice/Song is Being.” In fact, Rilke’s “Sonnets” invoke “Ruhm,” or fame, which he calls the primary objective of the classical poet. And what does Gaga constantly refer to? The fame: “that self-love, that inner-confidence.”

Lady Gaga may be forever changing her costumes and look, but the 25-year-old superstar says two things are permanent: her bow tie hairdo and her tattoos. When asked about her inner arm tat, the singer says, “That one commemorates my favorite writer, Rainer Maria Rilke, a poet and romantic philosopher.” The inspiring Rilke quote that Lady Gaga has inked on her left arm speaks of coming to a crossroads in life, where you must choose between two things that you love. It doesn’t mean that you will stop breathing if you don’t do what you dream of doing, but a little part of yourself does get packed up and forgotten. Lady Gaga, however, may pin a more literal meaning to the quote in this arm tattoo, in relation to her desire to write, perform and inspire. During many of her performances, Lady Gaga collapses on the stage and claims that she’s like Tinkerbell: the audience must applaud to make her live.