It’s been nearly two years since Ariana Grande got her first tattoo, but the 20-year-old singer has now gone under the needle for a second time, adding a sweet new “mille tendresse” tattoo to the back of her neck this week. Ariana showed off her new tattoo, which is a French term of endearment meaning “a thousand tendernesses,” on Twitter and Instagram on March 13, 2014, along with the caption: “not exactly the easiest spot to get a photo of on your own but nonetheless I am very happy.” Ariana hinted last year that she was planning on getting a second tattoo – a simple sun image that she often draws on the inside of her finger – but we have to say, we are happy Ariana skipped that idea and chose a more mature design for her second tat!

After posting an image of her new “mille tendresse” tattoo online for fans to see, the singer thanked celebrity tattoo artist Romeo Lacoste from TV’s Best Ink, and the artist then posted a cute pic of himself and Ariana on his own account, along with the caption, “Guess who? Thanks @arianagrande for coming to get tattooed!” Ariana hasn’t mentioned why she finally opted for a second tattoo, but the ink comes shortly after the singer revealed that she was “feeling run down,” due to a hectic schedule that included a performance at the Women of Soul event at the White House on March 6. Maybe her French “mille tendresse” ink served as a sort of pick-me-up for poor exhausted Ariana. 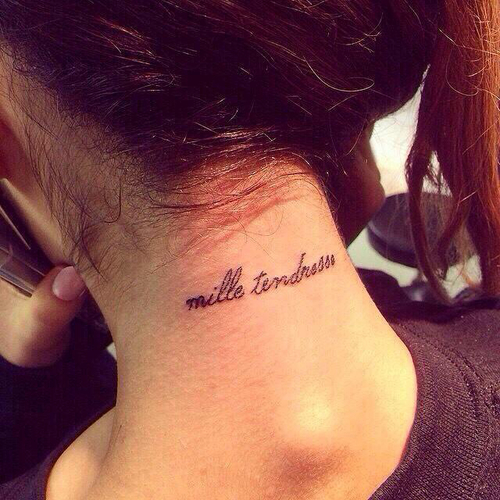 Foreign languages have always been a popular choice for celebrity tattoo designs – just ask Rihanna, who sports tats in languages ranging from French to Sanskrit, Arabic and Tibetan. French tattoos are especially popular, because no matter what the tattoo actually translates to, it always manages to look elegant and sound romantic in French, doesn’t it? For Ariana’s neck tattoo, the singer chose the French phrase “mille tendresse,” which was probably meant to read “a thousand tendernesses,” but it literally translates to “thousand tenderness.” The phrase comes from Ariana’s “all time favorite movie,” Breakfast at Tiffany’s, when Holly says “Bless you darling Fred. Please forgive the other night. You were an angel about the whole thing. Mille tendresse,” and the singer first tweeted the words back in January 2012. 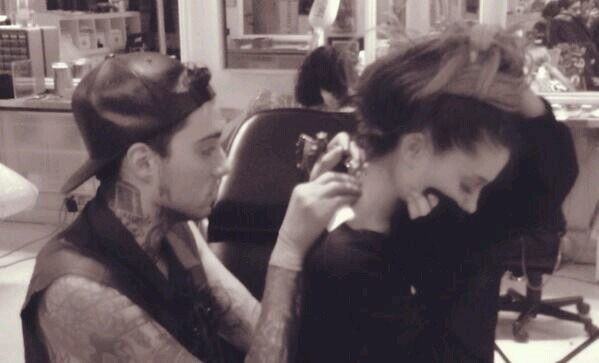 At the age of 20, Ariana Grande has cultivated an image of herself in the music industry as the girl next door, much like Selena Gomez, and, also like Selena, the pop star is sort of breaking out of that image now that she has two tattoos and counting. (Coincidentally, Ariana Grande’s tattoo is in the exact same spot as Selena Gomez’s tattoo of her mother’s birth year.) Ariana’s first tattoo came as quite a surprise for those who saw her as the sweet, innocent Disney star from Nickelodeon’s Victorious show, and now that she has two pieces, we could definitely see her adding more ink in the future. Ariana Grande’s tattoos are both discreet and tasteful though, and her latest choice of ink proves that she is becoming a mature adult!