Formerly the Disney darling who starred with Demi Lovato in Barney & Friends and later The Wizards of Waverly Place, Selena Gomez has ditched the innocent image and cemented herself as a grown woman, growing collection of ink and all. Between her on-again, off-again status with Justin Bieber, and roles in racy movies like Spring Breakers, Selena Gomez is a force to be reckoned with, and her various tattoos are proof of that. Some people believe that Selena Gomez decided to get inked because of her tatted-up beau, Bieber, but we have a feeling Miss Gomez is a rebel at heart, and her tattoos allow her to show off that side of her personality in a creative way. Believe it or not, Selena Gomez claimed that she was one and done after her first tat, but then she got a second, third, and fourth, and we all know it’s a slippery slope after that! Read on to learn more about Selena Gomez’s tattoos and their meanings, and see lots of pics!

As a tribute to her new Netflix series, 13 Reasons Why, and as a symbol of mental health awareness and suicide prevention, Selena Gomez got a tiny semi-colon tattoo on the outside of her left wrist in April 2017. The tattoo, revealed on Instagram, matches the same ink 13 Reasons Why co-stars Alisha Boe and Tommy Dorfman got at the same time as Selena, to honor Project Semicolon.

Following the Met Gala affair on May 2, 2016, Selena Gomez was photographed on the streets of New York in a casual outfit that showed off what appeared to be a new pony tattoo on her hip of DJ Pon-3, also known as Vinyl Scratch, a character from the cartoon My Little Pony that rocks a streaked blue mane and tail, purple sunglasses and a music note on her hindquarters.

Selena Gomez posted a photo to Instagram on April 20, 2016, and in it, the pop star inadvertently showed off a new tattoo on the outside of her right foot. Selena’s foot tattoo reads “Sunshine” in a simple black text and was inspired by her “Nana,” maternal grandmother Debbie Jean Gibson.

While enjoying some fun in the sun during a September 2015 trip to Miami, Selena Gomez sported a stunning one-piece black bikini that showed off a new tattoo on her left hip of the Hindu Om symbol. According to Hindu beliefs, Om is one of the most important religious symbols, and is capable of clearing the mind of thoughts and distractions when chanted. Despite the fact that she was raised Catholic, and has always proudly shared her Catholic beliefs with her fans and the public, Selena Gomez seems to be delving into the principles of other religions as they apply to her life, evidenced by her new Hindu Om tattoo! Read more about the meaning and story behind her om tattoo…read more

While running errands in Los Angeles in June 2015, Selena Gomez inadvertently showed off a discreet new tattoo inked on her neck behind her left ear – a letter inked in black, that could have been either a lower-case “g” tattoo or a capital “J.” Selena remained pretty hush-hush about her neck tattoo at first, but in an October 2015 interview with Refinery29, the pop star spilled the beans, explaining that the tattoo is, in fact, an initial “g” for her baby sister, Gracie.

Celebrity tattoo artist Keith “Bang Bang” McCurby took to Instagram to show off a new Selena Gomez arabic tattoo on July 16, 2014, but the singer reportedly got the ink one month prior and somehow managed to keep it under wraps. Tattoo number four for Selena is inked in black on the upper-right portion of her back and reads “love yourself first” in Arabic. She got the inspirational tattoo in the midst of breakup rumors involving on-again, off-again flame Justin Bieber, and proves that she’s got her priorities straight at least! Read more about the meaning and story behind her arabic tattoo…read more 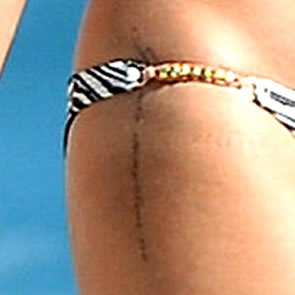 On October 28, 2013, Selena Gomez revealed a sexy new “God strengthens me” tattoo inked vertically down her right hip in a cursive font. Pictures of Selena’s hip tattoo were taken by paparazzi while the pop star was lounging poolside in Florida. The “God strengthens me” tattoo is a pretty hot little shout out to the big guy upstairs, as Selena joins in the ranks of many pop stars with religious tattoos. Read more about the meaning and story behind her hip tattoo…read more 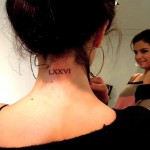 For her second tattoo, Selena inked another shout-out to her mother on the back of her neck – a series of small Roman numerals that read “LXXVI.” Although Selena hasn’t said much about her Roman numerals tattoo in public, the Roman numerals stand for 76, which just happens to be the year the 20-year-old singer’s mother was born. According to Selena Gomez’s tattoo artist, Keith “Bang Bang” McCurdy, the Roman numeral neck tattoo was inked as a tribute to a family member that she holds close to her heart. Sounds like her mother to us! Read more about the meaning and story behind her roman numerals tattoo…read more 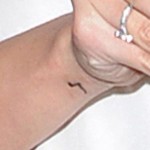 Selena’s very first tattoo was a tiny music note that she got inked on the outside of her right wrist on February 22, 2012. The music note tattoo came around the same time that the singer announced her decision to take a break from music to concentrate on her acting career, so the tat was likely inked as a reminder of her first love – music. After all, Selena was named after a famous singer (Tejano singer Selena Quintanilla-Pérez) and there are some music ties with her mother as well, so music is in her blood and now she has a permanent reminder on her wrist as well! Read more about the meaning and story behind her music note tattoo…read more

Selena Gomez Flaunts Sharpie Ink After Lunch Date with Kendall Jenner – Could a New Tattoo Be in the Works?

Selena Gomez Gets Stopped by Fan…and Checks Out Her Tattoo

If Selena Gomez Answered Back at Justin Bieber’s New Tattoo With One of Her Own, This is What it Might Look Like

Selena Gomez May Be Sporting a Secret Tattoo on Her Foot 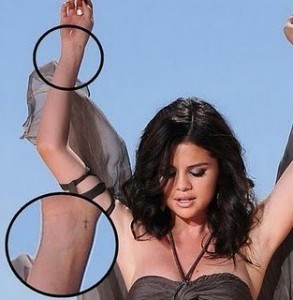 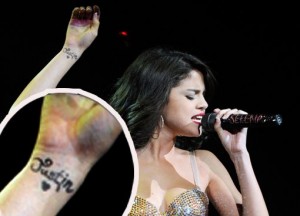