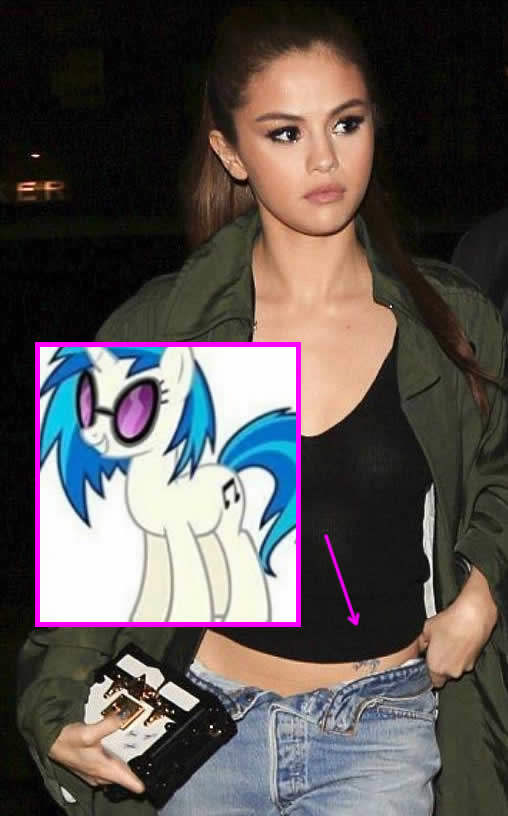 Selena Gomez stunned at the Met Gala in New York City on Monday night, in a jaw-dropping Louis Vuitton dress, cute little lace-up booties and a sleek, high ponytail, but it was her post-Gala look that had us all doing a double-take. Following the Met Gala, Selena Gomez stepped out to mingle with fans and pose for photos in cute but casual attire, including a black belly shirt, an olive trench coat, and low-rise boyfriend jeans that showed off her toned abs and something else – a possible new tattoo on her hip!

Over the past few days, everyone has been speculating about whether the ink on Selena’s hip is real or fake, and what the design of this mysterious Selena Gomez tattoo actually is. The most popular theory so far seems a little far-fetched, but we can’t deny that the hip tattoo looks an awful lot like DJ Pon-3, also known as Vinyl Scratch, a music-loving character from the My Little Pony cartoon who rocks a streaked blue mane and tail, sweet purple sunglasses and a black music note on her hindquarters.

In the past, Selena Gomez has often shared photos of her new ink on Instagram, although she isn’t afraid to keep us in the dark when she gets a fresh tattoo, either. For instance, when she got that sexy “God strengthens me” tattoo running vertically down her right hip, she admitted that the ink was actually a year old when it was spotted for the first time by anyone else. And it was only by stalking perusing her Instagram account that we found out Selena had a discreet “sunshine” tattoo on her foot dedicated to her beloved grandmother. 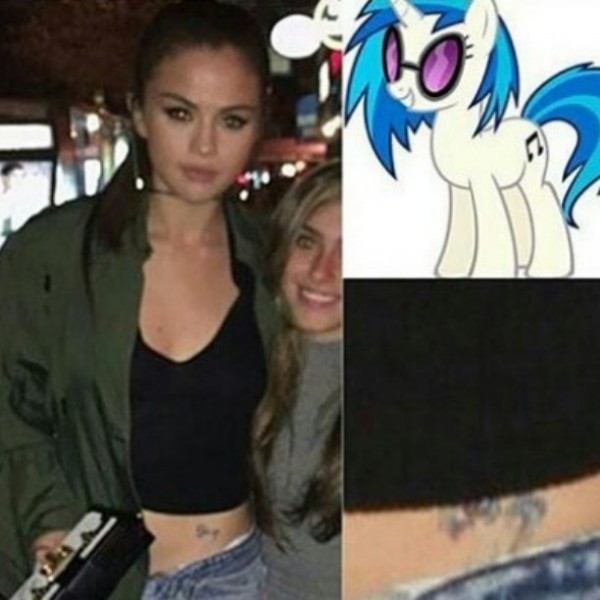 Needless to say, we wouldn’t be surprised if Selena got a new tattoo on her hip and didn’t tell anyone about it, but we would be surprised if she opted for a My Little Pony tattoo, considering most of her other tattoos are more serious or sentimental pieces honoring her music and her loved ones. Then again, Vinyl Scratch is obviously a big fan of music, hence the eighth-note “tattoo” she has, and My Little Pony has apparently used several Selena Gomez songs in their soundtracks, so it’s possible the singer is paying tribute to the cartoon for that reason.

What do you all think of Selena Gomez’s new tattoo? Is it the real deal or just a fun temporary tattoo? And if it’s a permanent piece, is it really a tribute to My Little Pony?? Let us know what you think in the comments section below!