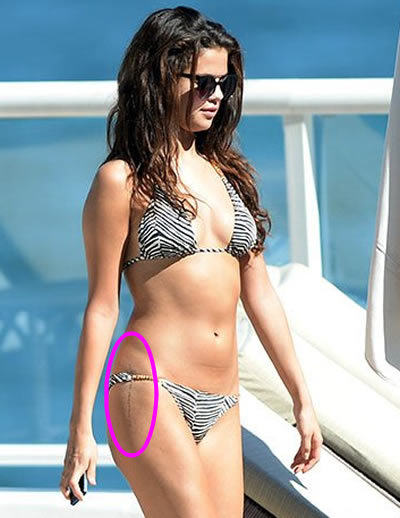 Update: We now know that Selena’s hip tattoo says “God strengthens me.” It seems appropriate that her three tattoos would be related to three important things in her life: music, her mother and God. The perfect trinity!

Selena Gomez must have really enjoyed the henna foot tattoo she sported in Dubai earlier this month, because just a few weeks later, the singer and actress has debuted a real tattoo – her third! More than a year after getting inked with her second tattoo ever – the Roman numeral “76” on the back of her neck – Selena Gomez (accidentally) debuted another tat on October 28, while lounging with friends poolside in Florida. In some close-up pics of the pop star, you can see the 21-year-old sporting a revealing zebra-print bikini and a new “God strengthens me” tattoo inked vertically down her right hip. Here’s the catch though…Selena has actually had the hip tattoo for about a year now…that girl is good at keeping things to herself!

Although Selena posed for and posted some pics of her and her friends at the beach on Instagram – along with the appropriate caption “Off duty” – it was the paparazzi pics that captured images of Selena’s hip tattoo. It appears that Selena may be taking some hints from fellow pop star RiRi, because her new tat looks sort of like Rihanna’s Sanskrit prayer tattoo, located in almost the same spot on her right hip. No news yet on where the pop star went for her hip tat, but Selena’s neck tattoo was done by celebrity tattoo artist Bang Bang, and she seemed pretty pleased with the result, so it’s possible she returned to Bang Bang’s shop for this hip tat. 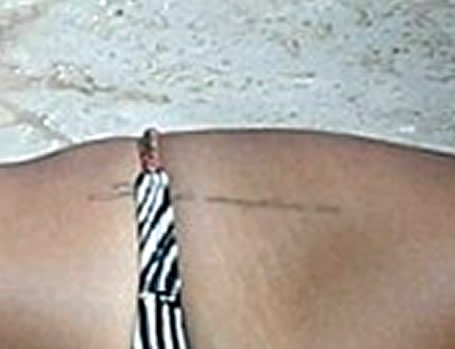 So the big question is…what is the meaning behind Selena Gomez’s tattoo? Well, the pop star seems like a pretty sentimental person, and her previous tattoos were inked to celebrate two of the most important things in her life: music and her mother. It makes sense then, that Selena’s tattoo on her hip would also be a tribute to something she holds close to her heart…her religious beliefs. “It’s my favorite Bible verse,” Selena said recently about the religious ink. “It’s Philippians 4:13…’I can do all things through Christ who strengthens me.'” The Selena Gomez tattoo reading “God strengthens me” is the perfect addition to her tattoo collection!

The day before revealing her hip tattoo, Selena went on a little rant while performing in Connecticut, telling her fans: “Every day I get told I’m not sexy enough or I’m not cool enough or if I did this or if I did that, I would have people who love me. Let me tell you one thing, the sexiest thing…is class.” It seems that the pop star looks to God for strength in difficult situations like this, and, for the record Selena, we think your hip tattoo is super sexy AND classy. So more power to ya!