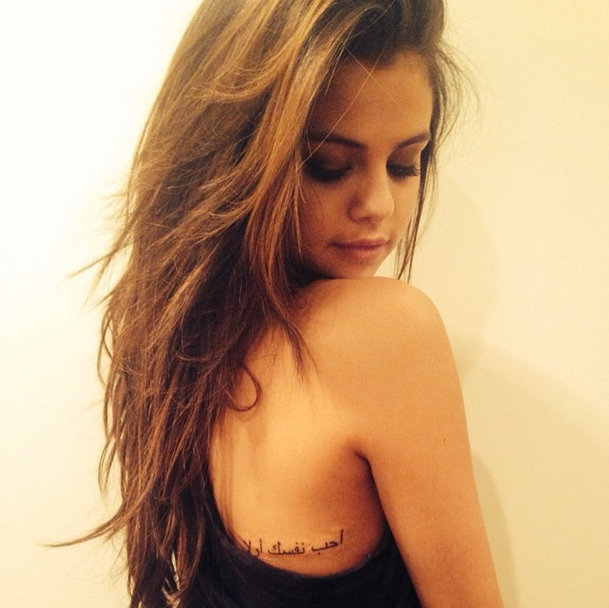 Rumor has it Selena Gomez has been a bit of a mess since breaking up with Justin Bieber (again), but the singer obviously has her priorities straight when it comes to love, judging by the new tattoo she recently had inked on her back. Celebrity tattoo artist Keith “Bang Bang” McCurdy posted an Instagram pic on July 16, and in it, Selena is showing off a new black Arabic tattoo on the upper-right side of her back that translates to “love yourself first.” Bang Bang captioned the photo “Little gift for my friend @selenagomez.” Selena turns the big 2-2 on July 22, and we think a brand-spanking new tattoo is a great way for the songstress to celebrate her birthday!

Some inked-up celebrities, like Rihanna and Cara Delevingne, are all about spontaneous tattoos, but Selena Gomez is obviously more the plan-ahead type of person. “She had been wanting this for a while,” Bang Bang reportedly said about Selena Gomez’s tattoo of the Arabic saying. “Selena already had it written out how she wanted” before heading to Bang Bang’s New York-based tattoo parlor. According to the tattoo artist, Selena’s Arabic tattoo is about four inches long and took approximately 30 to 45 minutes to complete, the hardest part being the placement. “The longest part is laying it out. We played with it a bit laying it out, until we found the perfect spot.”

Like Selena Gomez’s “God strengthens me” tattoo on her hip, which the singer successfully kept hidden for one ENTIRE year, the Arabic tattoo on Selena’s back was actually inked about a month ago, in the midst of some pretty cryptic posts and inspirational Instagrams from the former Disney star. Just last week, Selena posted a quote from Zoe Saldana reading, “The moment you compare yourself [to another woman], it weakens you, and I’m not here for that. Once you know that reality [and] claim your space, your life becomes easier.” Sounds like these two ladies have a similar view when it comes to self empowerment! 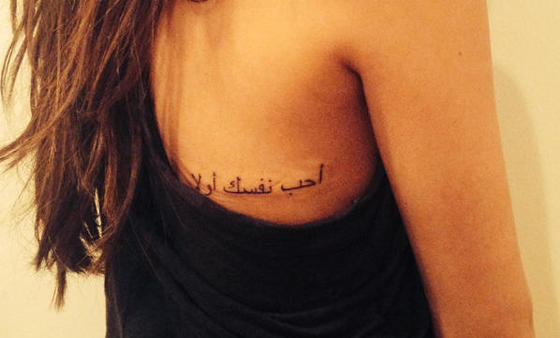 Selena Gomez may not seem like the tattoo type, but if you think she’s done getting inked, think again, “When we did that [Arabic] one, she was talking about another [tattoo],” Bang Bang said. “But we haven’t talked plans yet. There are always plans to do another one.” Regardless of what design she chooses for her future tats, it’s obvious Selena Gomez plans to stick with the pro – Bang Bang. Following the tattoo artist’s post, Selena shared a pic of the Arabic tattoo on her own Instagram page, along with the caption: “Art by @bangbangnyc – from my first to my last. It’s always this fool.” What do you think of Selena Gomez’s Arabic back tattoo?