A comprehensive collection of Liam Payne’s tattoos, the stories behind his ink, and lots of pictures! One Direction singer Liam Payne hasn’t quite caught up to bandmates Harry Styles and Zayn Malik as far as his tattoo collection goes, but he has amassed his fair share of ink over the past few years. It all started in October of 2012, when Liam decided to get two tiny screws tattooed on his ankles with some of his fellow One Direction singers, as a reminder to stay grounded despite their growing celebrity status. Next thing we knew, he was getting huge tattoos inked on his arms, like his bold chevron tattoo and various quote tats! Will Liam get into the double-digit tattoos club with his bandmates one day? We will have to wait and see, but in the meantime, check out our comprehensive collection of Liam Payne tattoos and their meanings below! 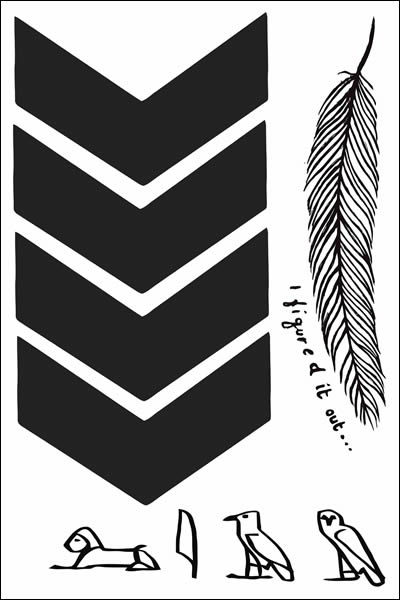 22. “L” and “P” Initials Tattoos on His Right and Left Thumbs

If you ever spot a Liam Payne lookalike, just sneak a peak at his hands, and you’ll know if he’s the real deal. In October 2017, the real Liam Payne had his initials inked on his right and left thumbs – the letter “L” and the letter “P” – and now the pop star will never forget his initials!

Liam Payne will never forget his birth year, thanks to a “1993” tattoo he had inked on his left arm in March 2017. The piece, a nod to his humble beginnings and the year he got his start in this life, is located on the back of his arm, as part of the pop star’s full sleeve.

20. Tattoo of a Woman’s Eye as Part of Liam’s Left Sleeve

While leaving Catch Restaurant in Los Angeles on January 28, 2017, Liam Payne revealed a new tattoo on his left forearm of a woman’s eye. The fresh eye tattoo was likely inspired by Liam’s girlfriend Cheryl Fernandez-Versini, with whom he is expecting his first child.

19. Liam’s Tattoo of a Realistic Skull on His Left Arm

During his same outing in LA on January 28, 2017, Liam Payne showed off an incredibly realistic skull tattoo on his left arm, believed to have been done by Liam’s favorite tattoo artist, Nikko Hurtado, who is responsible for much of the singer’s intricate ink.

In a shirtless selfie posted to Liam Payne’s Instagram account on October 23, 2016, the singer showed off another component of his lion crest tattoo and growing sleeve, an image of a medieval knight wearing a helmet with slits for eyes. The helm appears to be a part of the Payne family coat of arms, like the lion crest tat.

Just a few months after Liam revealed the intricate clock and gears tattoo on his forearm, a new tattoo popped up online that also appeared to belong to Liam, possibly a new addition to his growing tattoo sleeve. Liam Payne’s lion crest tattoo features what appears to be a family crest or coat of arms, featuring a lion standing on his hind legs and lots of intricate scrollwork extending out from the crest.

On March 16, 2016, California tattoo artist Nikko Hurtado took to Instagram to show off Liam Payne’s half sleeve tattoo – a massive piece on his forearm featuring a pocket watch and gears, or cogs, inked in black and white.

Tattoo number 14 for Liam Payne is a small number 4 inked on the ring finger of his left hand. Some people speculate that Liam’s “4” tattoo is a tribute to his One Direction bandmates, sans Zayn Malik, who quit the band almost exactly one year before Liam got his finger tattoo done.

While walking through LAX airport in Los Angles on January 15, 2016, Liam Payne was photographed with a brand-new tattoo on his left hand. Liam’s roses hand tattoo is a black and gray design featuring three roses, two in bloom and one closed up, and is inked on the back of his left hand, extending from his wrist up to his fingers.

In One Direction’s “Perfect” music video, released in October 2015, there is a scene that shows Liam Payne sitting in a tattoo artist chair getting a new tattoo of bold black Roman numerals on his right forearm. After doing some digging, we found out that Liam’s Roman numerals tattoo was real, and that it stood for his X Factor audition number, 61898. Aww!! 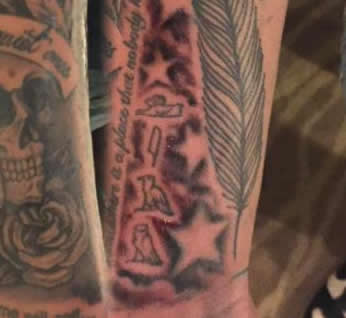 In October 2015, Liam Payne debuted a new tattoo on his right forearm featuring a bunch of feathers and a series of stars, which elevated his right arm to half-sleeve status. The stars in Liam’s tattoo appear to just be some filler, and the meaning behind his new feathers tattoo remains a mystery!

10. Liam Payne’s “We are the quiet ones” skull and roses forearm tattoo

Just days after debuting his eagle hand tattoo, Liam Payne showed off another new tattoo of a skull surrounding by roses on the outside of his right forearm, while celebrating a friend’s bachelor party in NYC on August 30. Liam’s skull and roses tattoo features a banner up top that reads “we are the quiet ones,” and was inked by Rising Dragon Tattoos in the Chelsea section of New York.

While performing with One Direction in Detroit on August 29, 2015, the day of his 22nd birthday, Liam revealed a brand-new tattoo on his hand of an eagle flying against the rising sun. Liam’s eagle tattoo is inked on the back of his right hand, and features two blank banners, which we are assuming will be filled in with text at some point!

8. Liam’s arm tattoo reading “Somewhere is a place that nobody knows.”

During the South American leg of One Direction’s Where We Are tour, Liam Payne went under the needle and added another new quote tattoo to his collection. Tattoo number eight for Liam is inked on his right forearm, just above his feather and hieroglyphics tattoos, and, although early pics of the tat were blurry and completely unreadable, we now know that Liam’s tattoo reads “Somewhere is a place that nobody knows.”

Right around the same time that he got his “I figured it out…” tattoo inked in Glen Burnie, Maryland, Liam Payne added another new arm tat to his collection – a series of Egyptian hieroglyphs that combine to read “Liam.” Liam’s hieroglyphics tattoo features an image of a lion laying down, a tool that looks like a knife, a bird, and an owl looking to the side, inked vertically down the singer’s right arm in simple black ink.

6. “I figured it out” tattoo added to Liam’s right arm feather tat

Liam caused quite a stir when he got the “I figured it out…” tattoo inked below the feather tattoo on his right arm, not because he got yet another tat, but because of what the words represented. The lyrics included in Liam Payne’s “I figured it out…” tattoo were actually taken from a new One Direction song that hadn’t even been released yet at the time. Fans were thrilled that Liam’s arm tattoo gave away that juicy tidbit, and we were thrilled to add another tat to Liam’s list!

It’s a big jump from the tiny screw tattoos on Liam’s ankles to the giant feather on the inside of his arm, but the sweet meaning behind Liam Payne’s feather tattoo helps up overlook its size. When Liam was a child, his beloved Nan passed away and his mom started leaving feathers around the house for the kids to find. According to Liam, his mom would tell the kids that their grandmother had left the feathers for them, which helped them feel connected to her despite her absence.

One of Liam’s largest tattoos is the bold black chevron tat he sports on the outside of his right forearm, taking up most of the area. Liam Payne’s chevron tattoo was inked in November 2012, and the piece features four black arrows, all of which point in…dare we say it? One Direction. Although the chevrons in Liam’s tat are traditionally used as a military insignia, we have a feeling the pop star’s arm tattoo is actually a tribute to his four bandmates.

3. “Only time will tell” quote tattoo on the outside of Liam’s right wrist

Back in October 2012, Liam Payne went under the needle yet again, emerging with a tattoo on his right wrist that reads “only time will tell…” Like many one of the One Direction boys’ tattoos, Liam Payne’s “only time will tell…” tattoo is sort of cryptic, but it probably had something to do with the singer breaking things off with ex-girlfriend Danielle Peazer. The break-up must have been tough, but Liam’s wrist tat hints that a reunion could be in the works!

2. “Everything I wanted but nothing I’ll never need” quote tattoo in script on his left forearm

Despite their international fame and fortune, Liam Payne and his One Direction buddies actually do seem quite down to earth. Well, Liam went ahead and put that sentiment in ink when he got a tattoo on his arm in October 2012, which reads “Everything I wanted but nothing I’ll ever need” in script. Apparently, Liam Payne’s “Everything I wanted…” quote tattoo means that, regardless of all the material things he acquires, all he’ll ever really need are his family and friends.

Liam Payne got his very first tattoo alongside bandmates Harry Styles and Zayn Malik way back when, and the matching screw tattoos are apparently a reminder to the boys to stay grounded no matter how rich and famous they become in their careers. Liam Payne’s screw tattoos are inked in black on the inside of his left and right ankles, and look like tiny crosses or plus signs.

Liam Payne May Be Planning a Chest Tattoo for Newborn Son, Bear

Is This The Latest Addition to Liam Payne’s Growing Sleeve?

Check Out the New Roses Tattoo on Liam Payne’s Hand!

Liam Payne Has Some Regrets About His Chevron Arm Tattoo

Liam Payne Gets Not One but TWO New Tattoos in NYC!